To Chase a Ghost! 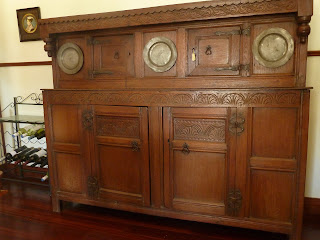 ‘The Dresser’ is an interesting phrase. I was once in a play by that name. Perry Burton was the delicately effete dresser to Bill Baksa’s irascible and self-centred M’Lord. My role was as the undeserving, the one insufficient of self to stand on his own two feet but must needs wait attendance on the company until chance and circumstance collided to grant him opportunity  to rise to the occasion, to perform a greater role than himself. Interesting how that cameo was not quite so much in my consciousness until this very moment. Like a ghost it slipped out of some cabinet in my mind only now to clamour for attention.


Like the squeaky hinges on M’Lady’s ‘dresser’. That’s what she calls it. That’s apparently what it has been called since the 9th century! Yes, since Aelfred The Great himself. Mentioned in Aelfred’s will, and now in the Duke of Norfolk’s line of heritage, Arundel Castle is believed to be the second oldest in Britain (according to the newspaper clipping about the eminent historiographer, John Rutherford). The dresser, big as it is, eventually found its way to a London antique shop, and that’s where newlyweds Nancy and Denys Sinclair decided to spend just about their entire war-service gratuity on acquiring it. Yes, it was authenticated. And yes, that immensely heavy and expensive nine foot long oak dresser has travelled with them from England to Australia (in `59) and thence from house to house. Almost 70 years in M’Lady’s possession; but almost a thousand years in the presence of man! Perhaps Aelfred himself set eyes on it? And since the hinge on the upper left door squeaks, “and has squeaked like that ever since we’ve had it; it keeps the ghost’s away!” M’Lady jested; did Aelfred once hear that same sound too?


Thing is, for whatever reason I’ve long been fascinated by Aelfred. As a boy it was a pivotal point in my being interested in history when I realized that Moses could not have spoken English, that Yul Brunner’s Pharaoh could not have spouted, “So it is said, so let it be,” in English, that Cleopatra could not have burbled as senslessly as did Elizabeth Taylor. Nor could King Midas so command the sea. English did not come find its birth until Aelfred! He amalgamated the Angles, Saxons, and Jutes, and fixations of word usage thereby evolved with The Northumbrian Chronicle. At university I studied Anglo Saxon, memorized snippets for imaginative pronunciation, as I did with the opening passage of Chaucer (almost two centuries after 1066 ‘and all that’, according to a mirthful Monty). Not until Shakespeare does English become recognizable to our ear, and even then there are many who do not take to his words. Or to his ghosts.


So the squeak enchants! Now the liquor, chocolate, and candle-cabinet, along with collectibles of every kind, that ancient iron hinge lets one know that a door is being opened on the past. And as I sit in the same room surrounded by the ghosts of Sir Arthur, Mummy Denise, Maman Angele, Colonel Douglas, War Hero Pat, Great Escape victim Denys Street, Stalag Luft 111’s P.O.W. Denys Sinclair of Caithness, Diana the Artist, Ian the Land Developer, Nicholas the Marine Biologist, P. Crosly the Ranchman, and B. Cory the War Veteran, can they hear the squeak of the cabinet too? Mayhap. Particularly at sherry time!


We make meaning out of small things, or small things make meaning out of us. Facility with like-minded knowledge and interests and abilities allows for longevity of relationships, or not. That dresser was consigned to be burned on the Fremantle docks! Denys Sinclair had to attend an unpacking and inspection ceremony when the crates of their family furniture arrived. The official was adamant. Pock-marked with weevil holes and wood lice the piece was not entering Australian soils. But after some delicate persuasion and assurances that all had already been decontaminated, it was permitted to be kept. Imagine! All 900 years of The Dresser, to be consumed by fire. Enough to make a ghost shudder! 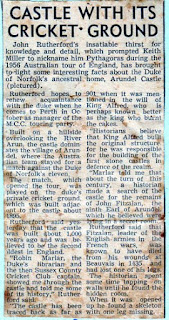 Posted by rfpentelbury at 4:21 PM