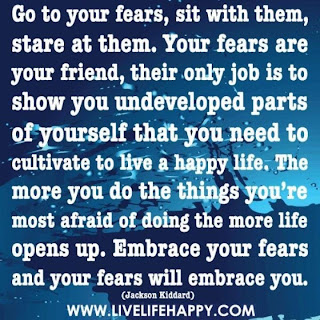 Facing into one’s fears is an old theme. We prefer to keep them penned out, bottled down, tucked away, unsaid. Thing is, we cannot quite trust the reaction of the person we reveal ourselves to, and so we learn to be secretive, clandestine, deceitful. I always wanted parents like Timmy’s in the Lassie TV series, or like The Wilders in Little House on the Prairie, or like John Boy’s parents. Why could my own mistakes not be dealt with like that? But no, caught with my hand in the cookie jar I was not given a loving understanding of the implications of the trust I’d betrayed; I was severely dealt with. Brutally. More, my sins were told to all and sundry. And even more, that moment was thereafter the moment that I became forever afterward an ‘untrustworthy’. After all, that’s when I was called a devil, a thief, an ingrate. Yes, many a child has hardly been able to surmount such a simple moment, chiefly because of the reception they received at the discovery. “Tell me the truth now,” someone will say, and then all hell breaks loose. So children learn to lie. Adults perpetuate little white lies. It all goes toward saving face, if not our own, then someone else’s. Truth is sometimes too valuable to share. We are human, we make mistakes, but there appears a harsh judge and unforgiving jury at many a turn. Would you put on your application form that you once stole a chocolate bar? At 10, at 16, or how about at 37? No, we instinctively know what may get us into more trouble than it is worth. Ha! Imagine if we examined our presidential candidates based on such a platform? Ever lied about ‘anything’ at all? Ever? Never ever?

Actually, that whole cookie-jar story I just made up. It did not happen to me. But it serves to show the extent to which one can relate. I did not get caught at so very many of the things I did as a youth; others did. And much of the reason I did not get caught was that I was super-cautious, full of fear; others may not have cared as much for the consequences, so they were less cautious. And then there’s the whole issue of how very differently we each learn.  A single glance is enough to reprogram one student altogether; other students I’ve known, especially back in my boarding school days, got caned many times over for doing the same thing. Fear reaches us differently. Any jail reveals that much. And conscience grows us in us at different rates; we learn some things quickly, other things we repeat and repeat. Other’s examples do not suffice, or we might have been perfect after Solomon, or Jesus, or...

Dichotomies are not quite my thing. The either/or transubstantiations of life tend to polarize at the expense of the whole. Some psychoanalytical types (I guess I be one) claim we either give or we take, we love or we fear, we are positive or we are negative. What may not be understood by the listener is that we well may be perceived as such, in the moment! And then we add ‘predominantly’ to our actions and we create a general picture of ourselves being half empty or half full, etc., and augment thereby the labelling of ourselves such that we readily say, “I’m a fearful person.” Well, I’ve been called a coward once or twice in my life, perhaps more. But I also have been called brave. It is knowing inside oneself what the value of leaping the fence and countenancing the dragon is worth to the self, to others, to the universe, that matters. And even then, one may most surely get it ‘wrong’. What to one person is the boogie-man personified is to another just a harmless grass snake. Some may mock at your fears.

Meeting one’s dragon head on and taming it might best be a most private thing. Bringing it back for others to see is likely to have it shot down on sight, or at least to incur everlasting distrust that it may eventually reveal the beast that it truly is. For some, our dragons are invisible, yet others know they are there. They have their own too. Many of us cannot name them. Others feed them, like caged-up pets. To walk freely amidst the ongoing turmoil of life is to be one who truly knows his dragons, tamed, and free.
Posted by rfpentelbury at 4:33 PM