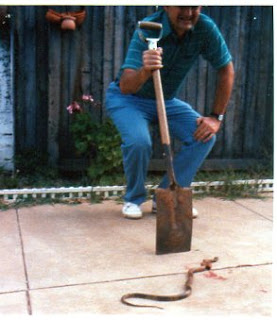 Not until I related the story did a shiver course through me. It was one thing to have the fall out, but then actually to explain it gave it significance beyond the immediate. Perhaps in my flow of 3 a.m. something application to task I took the gentle flip, flap, drop of the hard-copy photograph for which I was searching as de rigueur.  I do know I thanked it for being revealed! Thanked Perry’s ghost.


All around me Australia slept. The birds had not yet stirred. Usually, the nesting pair of kookaburras over at the billabong are the first to laugh themselves awake. I was in the dining room, the weighted down chairs arraigned around me, M’Lady getting her sleep. Circumstances yesterday created a train-wreck in the smooth order of things; we needed photographs that belonged to another person, were with that person, and needed both sorting by and commentary made by that person. And though there be reason enough for non immediate delivery, the vital time needed to keep this train on track was waylaid at a side-station. In the meantime I tended to the reserves, replenished the order of things, backed up the two brain-sticks, and... But it did take until nearly midnight to get that section done. And now, at 7:30 a.m. with a hold-up as I wait for the very last hard-copy before all the rough draft is done, I write here with a sense of awe for this early morning’s fall-out.


Not all fall-outs are bad things. I was searching for the snake. Well, not the snake but the picture of Perry killing a live snake in Nancy’s back yard. I’d not seen it. In her notes from yesterday, Nan wrote “see Perry’s page”, and though in my pre-dawn daze I checked and re-rechecked, no such slippery thing snuck up to greet me. So I went to source. And sifting through the piles of stuff on Perry’s chair (too close to Nancy’s bedroom for me to make any noise about it) I went through some albums, lifted the papers and documents off the chair, and... The lone photo just fell, flip, flap, to the floor!


So many kismet moments have happened on this journey into another family’s soul. The right moment to edit something; the right moment to catch a mistake; the right document to be revealed at the flip of a page; the right album to delve into to get the right image for the right words. Such is rapport. And there is hardly any tension in the admixture of a 90 and a 60 year old working over six weeks now on a 24/7 project that has become all-consuming. We honour the ghosts. We take down the pictures off walls and dust them of the very many years worth of being left alone. We take the frame-backing out with pliers, knives, scissors, and we scan the photo, clean the frame’s glass both sides, and put it all back together again to be even more-better than it was before. And it all flows as the work goes, with just some hiccups for the check-in, the persuasions to include or exclude; the reasons not to have a fall-out.


Ego concerns were momentary. There were a few days in which My fear was about My not being able to deliver, or if I did, that some error would reflect badly on Me. But such feelings were of the moment; i have spilled over into the grander service unto others that life really becomes. And whether in the moment, or with the product in hand, one has but evidence of where one was at in any given time, which has already passed. Such is flow. If we are rivers of energy then we are not a boat to be tossed about on the surface, with all hands on deck. Control of the boat has its merits. But boats are but the projects that we do on the surface of ourselves. Our essential current runs deeper than that. Besides, when in a boat, one can have a fall out. Only then may one realize the grander ocean that buoys you.


Posted by rfpentelbury at 5:49 PM