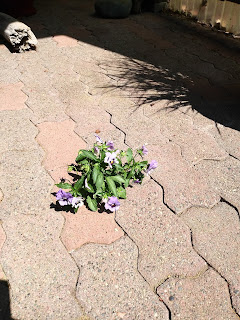 The screw would not budge. Four inches long, its counterpart had come out, twist by twist, grudgingly, giving up its deep grip on the wood. But this screw, now, despite all the force I could muster, came out only half an inch. Ironic; to pull something out one must push so forcefully. As well, it was necessary to have the correct tool, so that purchase in the grooves of the screw-head would not slip, or worse, would not strip the flanges of the thing, altogether. One pushes to pull. One turns to back out straight. One aches to gain. Had I not wished or needed to use the same screw hole over again, I might just have hack-sawed the thing. But one pays one’s price.

It is in opposition that we find our true metal. Cursing and acting out is not so much ‘out of character,’ as it can be in our character. Deep down. To get something, we can be like children, behaving with some atavistic variant of yelling with deep frustration to get what we want. One strives for significance. But not all efforts are equal. There is little equanimity of reward for struggle. We each must find our measure in all the doing, the undoing, as well as the re-doing that goes along with our progress, in life. The marriage of the right moment, the right tools, and the right energy needs all meet, serendipitously, for one to have easy success.

The 2021 USA inauguration, this January 20th, needed much counterforce to unscrew the incumbent from his cherished position. Unyielding, recalcitrant, the inevitability of circumstance and event, time, and date, had old POTUS meeting with forces beyond his control, and petulant as he was, a new order took place. At issue is the time it takes for things to change. Throughout history we have witnessed the great onslaught of revolutions and upsets and plagues and pestilences. We have endured. But in the collective ‘we’ of that endurance millions along the way have given their lives. At Capitol Hill, with its dire insurrection preceding the Presidential changeover, five people gave up theirs. Each was there for a reason.

Reason would have us working with something, rather than against it. Reason would have us negotiating, and influencing, and urging, and even manipulating the course of events to have the sensibility of our impetus recognized, and acted upon. But history proves that we do not easily or readily resort to reason. Brute force is the habitual recourse. The one with the biggest bark, the biggest following, the greatest amount of strength, tends to prevail, even if only for a while.

Peace. Ease. Such is the stuff dreams may give us. We can cry in our dream with the begging of forgiveness; we can meet with the circumstances of yore. And by facing into them, like facing into pain, or to fear, or to regret, we can gain purchase on the slippery grip of our contentions, and by dint of supreme effort, or care, or consideration, we might well find our surcease. But it takes pursuing our course of action with an intentionality borne not so much out of desperation, as of unswerving attention.

Opposing forces create pearls; the piston stroke of engines; sporting events; and dramatic action. Themes of conflict stretch most yarns to a climactic breaking point. Tension for too long, becomes humorous. In short bursts, tension becomes an irritant. But stretched just long enough, opposing forces can yield a product that demands our attentive measures of application to task. And our reward.

Eventually, the screw came out. Using the thinnest drill-bit down beside it gave it room. Yes, we do well with assistance. Words, love, care, smiles, hugs; these are the salve of our lives. Yet where the real work of life is done (if one is not always to be screwed up, ha!) is encountered alone; where having the right tools, the right templates, the right rubrics, and even the right stuff, becomes not so much a by-product of our experiences, as a way of pursuing life.

Facing into one’s reserves of resilience, fortitude, endurance, and going beyond one’s habits, that is the stuff of paradigm shifts. (Or is it just that one wants not, ineluctably, ‘to be screwed’?) 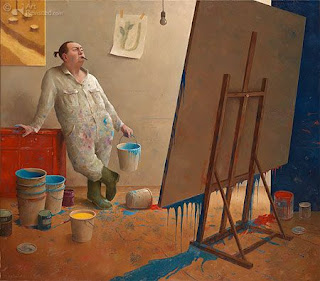 Posted by rfpentelbury at 3:07 PM No comments: