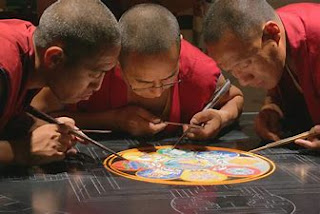 Each keystroke matters. We too easily make mistakes. It is too bad. When in too much of a hurry to write, between the two of us, we can get too sloppy. It’s its own reward. And a lot depends on our knowing the allotted homonym differences, sure, but somehow, nosing in among the typos, a sense that our standards are slipping, builds. We grow careless. We grow carefree. We grow inordinately causal.

The Buddhist monks, somewhere, make these beautifully wrought mandalas, pebble for pebble. Each piece is carefully handpicked, methodically, and patiently, added to the whole. It’s a meticulous exercise of being aware of the now. And when all over, in historical times, they forbade a capture of the result by camera, and swept the thing over, giving the product but a momentary and brief conclusion. Life is in the moments. It is not a product as much as it is a journey. Thought for thought. Choice for choice. Word for word. Action by action. But nowadays, for whatever reason, the monks not only allow pictures taken of their final product, but some even pose for ‘selfies.’ Indeed, one needs not take oneself too seriously.

‘Selfies’. Is it not interesting how language grows? Even a word like ‘interface’ was not known when I was a boy, let alone ‘internet’. And so too shall communication be affected, such that the effect will be that new coinage and new nomenclature and new syntax and grammar and spelling all meld into what might eventually become the new Esperanto. Back in the 1960’s there was an actual Esperanto school syllabus, and at the time it was no silly-bus for a boy to take a ride on. (Or does my attempt at humour but elicit a hmm from you?) Thing is, like taking selfies, we are nowadays so very self-referenced, and unless we’ve had a direct relationship with something, like having been there, or seen it, we easily are distracted away from the unfamiliar, yet do seek the sensationally new. Old things; old stories; old ideas; historical lessons; these are like old language: stiff and formal and demanding and rigorous and up-tight.

Editing others’ work brings with it a host of compositional and structural rules, yes, but the individual idiosyncrasies of matters of choice are best to prevail. After all, the ancient Egyptians likely imposed a very strictly controlled depiction of human representation in their art. (The song, “Walk Like an Egyptian,” resonates.) But it is difficult to conceive of not one Egyptian, not once, in over three thousand years, being able to render a person as anything other than one dimensional. Nowadays one fortunately has very much leeway. We have sped up individual evolution to absorb, assimilate, include, accept, and have understanding for the very many differences among us, let alone the variegations of speech, spelling, and our inept tapping away at a keyboard. (Predictive spelling can prove quite embarrassing!)

But it is of a larger picture that I write. It is of the differentiation between the fluidity of a generalized acceptance, and the awareness of a preference for precision. Might one be better off to take one’s time to dot one’s I’s and cross one’s T’s? Might one be better off to pause and re-read, before sending, before posting, before implying, before negating, before arguing, before contending, before averring, before bruiting abroad one’s private and heartfelt sentiments, (or even, hereby, proffering one’s pretentious intellectualisms?) In other words, is there a better selfie to be taken, before showing the world one’s mental picture?

Vanity would have us overly aware of what someone else is seeing. We wish to impress. And we do need to feel pride in ourselves. Security allows us, by contrast, not to worry overmuch about a bad-hair day. In the casualness of every-day living, it matters not really what we look like when going out. Nor does it matter, overmuch, what we type like, in messages, and in email, and communication with others, particularly if they are firm friends, or family, or people we instinctually know will not judge us.

But when we leave a picture for posterity, it might be best to have shown off our best, in the first place. 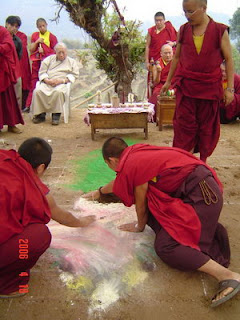 Posted by rfpentelbury at 9:11 AM No comments: