By Way of Apology 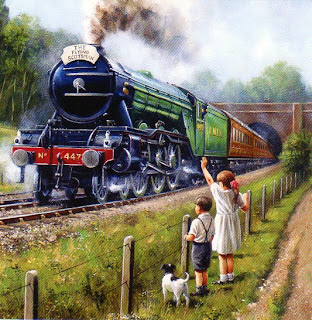 "The Flying Scotsman even went by way of us here, in Guildford, West Australia!"


People see things from their own point of view. I am most guilty of not fully considering that enough in my head-long hurtle toward a date-line. My partner in this venture is not only 30 years my senior, but has gone through emotional touchstones as profoundly as fully waylaying full-stops at train-sidings for refuelling. A single photograph can create a new chapter of story. A single name can bring a glaze to the eyes as the heart opens to remembrance. Old letters are not quickly scanned; they are treasured, word for word. And in this metaphorical journey of our train toward a final destination I am not now just the stoker of the steam-engine (as I actually was when young); I am the Driver. And this driver has a personally decided schedule! After all, even the grandest of engines eventually succumbs to disuse.


The sidings and the place names en route were initially strange to me; this was a track I’d not taken before. And though M’Lady had indeed lived the full 90 years of the journey, she’d not quite had to go over it from start to finish in such clarity, nor as many times over and over. There were people we’d left behind at stations. Some we actually threw off the train! But in the backtrackings or in the chugging up the endless switchbacks my own impatience was for the speed of the entire freight-load of strangers to be brought toward their final destination, whereas M’Lady had the reality of knowing each person, of needing to revisit each for awhile, and of wanting excursions into the villages and towns and cities of her memory. Few of us have been around the world. Not me. But she’s been Five Times! Few of us have had 14 close family members die, especially when many were younger than her, and though I was impatient to get going, we needed to pay respect at their gravesides. We needed to clear away the brambles and the weeds and then scour the grave-stones for clarity of dates. And then we needed to relocate the rector and enquire as to the relevance of the placement and care of burial plots in a landscape full of ghostly recalls. Even last night I was handed the phone, long distance from England, to be waylaid in my headlong hurtle to closure by one of M’Lady’s old relatives, a recently retired Concorde pilot whose father, Eric, was the brother of Nancy’s war-hero husband. Eric Sinclair had in 1943 flown as navigator in a Lancaster bomber alongside his brother, Denys Sinclair, on one sortie; and now here was his son, Peter the prestigious Concorde man, just a few years older than I, graciously entertaining me; I felt humbled.


In this analogy of switch-points, train tracks, steam-engines, and carriage loads of people, we each had many roles. Driver, linesman at railheads, switch-point operator, stoker, carriage-coupler were my parts. Nancy was the goods-car manager, the chef, the server, the ticket-taker, the passenger liaison and...


Thing is, I could have been, should have been, more patient. That we had but seven weeks to go back and forth on a journey that ordinarily would take years (given a page a day at 450 pages) impelled me with steam-rolling action from day one! Today, after yet one more final meticulous edit, there is the conversion of 176 files into a PDF format. Why? Well, last night, as I showed M’Lady, the alteration of a single small c in ‘coast Hill’ to a capital ‘C ‘completely fragmented and made unrecognizable seven pages worth of work. Watch! (I had my finger on the button.) Change the ‘c’, and everything goes hay-wire. The train just jumped its tracks! No! But click on the ‘undo’ button, and everything magically slid back into perfect order. “Hm. Wish life could be like that; imagine having an undo button at one’s command!”


Alterations can be made to even the smallest of undotted ‘i’ s. Entire new vistas can be taken in. But it all absorbs time. And impatience, I deeply regret, in all its ego-driven anxiety, can be as ugly as black smoke. In my 20’s, at Mason’s Mill, Natal, one was fined R10 for black smoke. What’s the price now?
Posted by rfpentelbury at 4:07 PM