A Series of Epiphanies 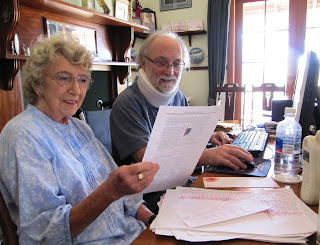 One little light-bulb is enough to reveal that there are things in the dark. Two a-bright make for more light. Three going on may begin to make a pattern. Four alive may distract. Five can make a star! Six can become a Big Dipper. Seven? Well, does enlightenment end when life is over? And in full sunlight we take for granted, generally, that we can see at all. Until viewed from the senses of one who is blind.

Telephone conversations can be like that. Blind. We do not know the other on the other end of the line but there is so very much we go by based on the voice, response, sensitivity, rapport. Intuitively one feels that the other could be a friend. This Nicolai fellow who is M’Lady’s printer and book-binder has that effect on me; I’d like to meet the fellow, sit on a park bench, have a chin-wag. Yesterday morning (it is now just past 3:30 a.m.) as I typed I was awaiting the courier to take the ‘brain-stick’ to Fre(e)mantle, and begin the publishing process. Later in the morning a neighbour, Christine, popped in to take a few photographs of Nancy and me in situ. She took about nine, had us always look up at her, ‘smile’; and they all looked ‘posed’. But the one I preferred, as shown above, was her first one, taken while we were preparing for the shots. Reality is better than posing. I think that’s what I like about Nicolai’s voice on the telephone, the authenticity.

Still, we can overlook things. Like my friend and his wife stepping out onto their Cape Town hotel room balcony for a smoke and closing the sliding door behind themselves, and hearing it go ‘click’. That light-bulb moment.  Apparently my friends were locked out and shouted down to no avail for quite some time. We forget, overlook, do not think, and otherwise go about our day quite innocent of intent, but can seriously inconvenience as a result. Which of the very many cousins and relatives and friends is going to feel locked out, overlooked, dismissed, snubbed? It rides Nancy. What spelling-mistake, date, formatting, photo, or document did I not get ‘right’? I must confess; it rides me. It is not so much that one wants other’s to say “perfect”. It is that one does not want to be on a balcony, waving at the crowds below, while someone unknown locks you down for the difference between alot and it’s varients. We make errors intentionally, or not. And such errors are as but part of the natural movements of man, like killing a skunk with the car on a Sunday afternoon drive (or was it a Saturday, back in `83? Or maybe`84?) depends very much on what we give focus. We humans are mistake-making machines. Even light-bulbs burn out. Knowing something once does not necessarily last forever; we needs replace the learning, sometimes. Often.

Epiphanies are like that. Most of what I need to know I learned in kindergarten was the clever title of someone’s book a few years ago (or was it decades?) We learn, forget, re-learn, forget, learn again, and so on. Our ego is like this giant watchdog, barking at us when we leave the house of our constant comfort and go venture on new learning curves. ‘Don’t forget me’ the ego yaps. ‘Mus’n’t venture too far from our interdependence.’ (Yes, my ego likes big words.) Punctiliousness was my father’s bent. He was most scrupulous about dotting ‘i’’s and crossing ‘t’’s. Got quite out of joint when he found mistakes. “The thing that boils my blood,” another old friend of mine used often to begin with (with which he often began) “is those who end sentences with prepositions!” Thing is, our ego-dog barks when it feels displeased, or wants attention; we take things personally. Yet many of us are dog-lovers.

This morning (much later than now) a courier will bring two copies of the published manuscript for us to peruse. Mayhap we will catch some glaring error. Mayhap we shall find a misplaced punctuation. Or not.
Posted by rfpentelbury at 2:39 PM