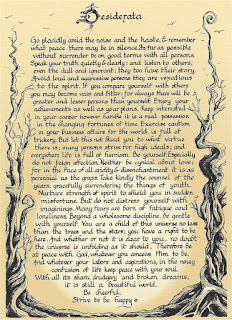 "But I hate the Olympics! All that one-upmanship. How do you integrate that?" The speaker is agitated. The voice is argumentative.

I am at pains not to appear pompous, and try the following:

"Integration does not mean condoning, nor even having to like, but accepting. If everything exists, already is, and may probably always exist, then integration is the acceptance that it is so; it is the exercise of preferments within the process. So we accept that there are the worst things as well as the best, and we evaluate with non-attachment, as opposed to having attitudes of arrogant-judgement, as we progress. We do what we can to keep the fox from the hens, the murderer off the streets, but we do so with compassion for what is, no matter what."

He looks up. He is unconvinced. "You still get angry."

"Yes. We are everything. But I am trying to become more and more responsive and less and less reactionary. No doubt I shall be learning that for the rest of my life, for reaction is natural, deep, atavistic."

"You and your big words."

"Ha! Interesting, aren't they? Atavistic is ancient-history, deep in the bones, in the genes. It often is reactionary, based on our enculturation, our family, parents, and our own habits of upbringing. It is the way the untrained and inexperienced react quite naturally to every snake; it takes reexamining our fears and our attitudes and our perceptions before we can reach out and pluck up a grass snake. So too for very many reactions we have about a lot of things; we learn them as we grow up. Racism, hate, attitudes, exclusionary group values, arrogant-judgements, expectations that are..."

"But if we didn't compete we would not have winners and losers, the better than, the richer and the poorer, the advantaged and the disadvantaged. Life is just not fair!"

"Yes. Life is not fair. Accepting that much will go a long way toward being able to allow things to be. One may wish to change things for the better, to contribute toward the health of the whole, to stop the evil and the hurtful, to cauterize the malignant and the diseased; but to have compassion for it all, as a primary response, is the reason for practicing integration, of accepting life just as it is, while nurturing its potential."

"Potential? See, something is always good or bad, right or wrong, better or worse. And I hate things that don't try to make things better for us, all of us, that drag us down."

"Then that hate will make itself felt. And that too is as it is."

"You mean you're accepting hate? My hate? Is that being integrative?"

I nod. And smile. But how am I received? I sense he thinks I'm pompous. Oh well. Ha!
Posted by rfpentelbury at 6:41 AM