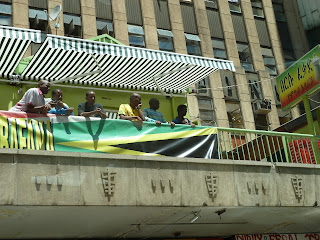 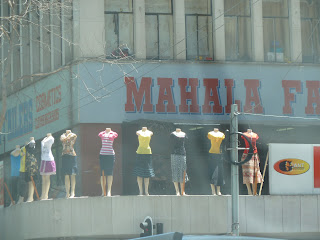 The quick hand that reached into the car, past the steering wheel, and grabbed the dog-collar off the dash-board won’t release its clench on my mind. I like your car, the youth said, it’s very nice! We were stopped at the light. Mike had the driver’s window down.

Saturday 16 October, 2010, D-Day. The dinner of my delivery is tonight. How to summarize the Pretoria Boys High five seminal years of 1966 to 1970, to give them historical value in the retrospective, and also to invigorate and inspire toward contributing to the future?

Yet even more in the immediate, how to face into the tears and hurt of the morning’s jaunt into the CBD and the Highbow that was?

We’d left the very worst of the neighbourhood, were on the fringes of entering the open spaces, and then this thing happened. There were four of us in the car, Justin and Rob in the back, me at shotgun. We all had had our cameras clutched up tight, our belongings ensconced away, the windows up. Speaking for myself, we all were still somewhat nervous, still painfully dismayed, still somewhat shocked, as Mike had expertly and carefully driven us through the streets clogged and narrow, past the buildings broken and shuttered and barbed and gated and fenced and spiked and peeling and stained and dark yet crawling with the carcass-like maggot-writhe of humanity in its natural display of very little evidence of care for regulations, civilities, cleanliness, courtesy, or fellowship.

‘Careless defecators’ is the scientific term for mankind. Left to his own devices he regresses to the survivalist and animalist instincts of the self, and given the statistics Mike had earlier quoted, in which rape and child abuse and murder and theft and graft and corruption and coercion and collusion and conspirators collude to create a cutting edge society that bleeds in its struggle for the light, our drive amongst the elements of what was, what is, and what yet shall be began to squeeze at my heart, overwhelmingly.

The CBD, or central business district, was once the height of Johannesburg’s opulence, and Hillbrow, though not a fancy neighbourhood was never like this. No never. Mike’s old house, the four-plex where he stayed alongside the whorehouse, was still there, although the disrepair, the sawed down childhood tree, the multi-repaired wooden ladder, the roles and roles of spiked wire, the sullen, insolent, bleak, despairing, and space occupying faces, in some measure, had been germinating in the throes of an apartheid era that spawned the overflow when the racist lid was taken off. And what the people are living in now, actually, is better than the shanty-towns of yore, when a brick or stone on your corrugated tin roof was all that kept the big-bad-wolf from blowing your house down. But oh my God, the children. The children. Suffer the little children to come unto me. And the churches, though named and not as unkempt, are as barb-wire protected and bolted up as is any other besieged building we slowly pass. It is for the children that my heart is so squeezed, my gut made so wretched, my tears eventually so freely flow. How hard is not the future yet for them to be?

We’d made only one stop. Eventually we’d found Justin’s old Brenthurst Clinic, where the burn-unit during the trauma of his childhood accident had taken him in and cloistered him. Our eyes on his 6 foot and fit looking frame, he looked yet once again lonely, vulnerable, as he walked from the car and went in search of a better vantage for his camera. But he had no desire to go inside. The thing was done. And speaking for me, the neighbourhood seemed to seethe with his presence, with our presence, as though the very whiteness of our large vehicle’s colour itself was an affront to the daily goings-on of a populace freed from the oppression of our dictates, and freed to feast on the foibles of itself. The tension amongst us was high. The entrance to the clinic from the other side boarded and barbed, and no sooner was Justin back inside than we began to get out of there.

But then that snatching hand came through the open window frame.

I like very much this car, he said, and he was smiling and friendly. I give you this, he said, it’s a present! And before I could focus the black belt, about the size and length of a dog-collar, was thrust onto the dash-board. Then he asked for money. We didn’t want the belt. We didn’t want to reach for a wallet. We thanked him, but to no… Then the lights changed, and as the vehicle began to move he reached in for the belt, quick as a flash, but Mike’s big forearm warded him off, yet still he managed to snatch the thing out, and in an instant there was electricity and fire and brimstone in his eyes and the curse of hell made microbial in the interaction, but split seconds later the man laughed, and we drove off.

Could have been a knife, Rob said.

To be or not to be?  Oh Africa, ask not for whom the bell tolls, I weep for thee.

Posted by rfpentelbury at 10:29 AM