Message in a Bottle

Message in a Bottle 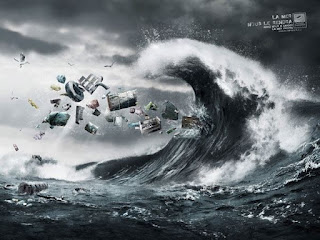 by Richard Michelle-Pentelbury on Thursday, November 11, 2010 at 10:54am
This will be my last missive from this address. I write as though having at last found a scrap piece of paper and a bit of charcoal. Around me is the detritus of my last life, the garbage bags, the devilish dust, the odd bits of flotsam from the surging seas of activity that has, wave after wave, altered the shore-line of my existence, rendered asunder my ship of state, and tossed me into a fragmented and dislocated existence wherein mere snapshots of free time allow for the looking up and grasping onto any memory other than the immediate. Moving houses will do that to you.
Some error in timing was made. We transitioned from the one shore to the other over a week, but the new refuge does not yet have telephone or internet connection, and since i have no cell-phone, no satellite connected palm-pilot, no ready address book, there was this distinct sense of being cut off from the past, from friends, from YOU, from life as I’d known it. And now  I write only because around me the sounds of the cleaning and dusting and last-minute packing done by the hired service is being done, affording me a moment in which to gather these thoughts in an effort to send them out to you. Soon this connection will be cut off too. Shall I post this in a bottle, this last message of mine from this last time in this old place?
While I was at work at Centennial the demands of picking up the pieces after my so very recent sojourn to Africa held me so captive that only the immediate was given focus. And given that one drives to work in the dark, and comes home in the dark, and is in a building of artificial light all day, it scarce seemed real that once, just a week and a half ago, I was under the African sun and skies, whilst now, here, I am as in Plato’s cave, the shadows on the wall dancing before me as if to make life real again. And that week and a half has been so filled with the students, the classes, the demands of mounting what is to be my last show, Pride and Prejudice, and then leaving in the dark to come here to this old house and to pack and take car-load after car-load to be emptied at the other house. Then too, there was the address to 2,000 persons to deliver at the Remembrance Day service.  Pride? Prejudice? Eschew the thought!
Boxes are so impersonal. They bear names like Kitchen, Basement, Bedroom, or R’s Stuff. And one carries each as though some sacred ashes are being transported; the condensed remains of what once was. Are our friends like that too? Are the names of Ian and Justin and Gus and Brian and Mike and Rob and Simon and Tony and Bert and Johan... well, are these persons and you too also to be but boxes in the jumble of memory for which I search as I scrabble yet once more for familiarity with things on some strange new shore?  The new tends to do that, for me. The new takes on an immediacy that packs up and condenses the past into entities given labels, at best. The new is examined and organized and mapped and referenced and made much of as one adjusts to the domestication of acclimatization. It’s much like the pot-plants that will need the new days and night times to adjust to their own new frames of new enlightenment. And the old memory remains packed up, or at best get searched for and then unpacked in terms of an immediate need. (Now then, just where did I put my precious marmalade?)
But of messages in a bottle, hoping that they’ll perhaps reach you, well.... here this one at last goes!
Now, do you receive me?  And if so, I really look forward to your response!
Posted by rfpentelbury at 11:16 AM