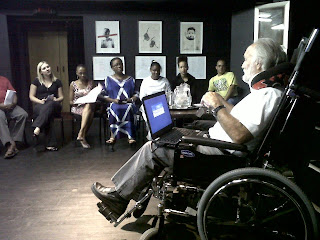 Hear me now, even though I speak to the initiated. The test is perpetual. Our perception of things drives our habitual reaction; we are, if not judgemental, then at least given to expectations of that which we think and feel we might regularly receive. In fact, as psycho-cybernetics would prove, we habitually calibrate ourselves toward the norm we set ourselves, and if we perform in one test at 87%, but believe we are really a 60% average, then we’ll self-sabotage in another test, and at the end of the day, virtually self-regulate ourselves along a 60% line of continuum. We need to re-think our thinking!

That was the gist of the presentation to which I was privileged in the late afternoon in the intimacy of my Aunt Meisie’s humble kitchen, her 36 year old son, Stanley, presenting for my critique from his computer’s power-point, his fiancé, Berdine, occasionally adding a phrase of further explication, his father, Clive Becket, sitting quietly, proudly, beside me. It was the first time they’d seen him perform; the first time they were given awareness of what it means for him to be pursuing a career in public speaking. And he was impassioned, articulate, inspired, and inspiring. I am so proud of this new friend of mine, Stanley, my first cousin.

He’d arrived at Meisie’s Valhalla house at 7.45 a.m., as promised. (I learnt later that it was a mark of particular sacrifice on his part to be up that early.) I’d never met him before. He was throwing the ball for the Alsatian when I emerged on him, and he brushed the side of his pants with his hand before shaking mine. Taller than me, handsome and vibrant, there was a look of intelligent intensity in his eye, and the air resonated in sudden accord between us. Stanley struggled mightily to get my chair into his vehicle, trying several which ways, most of the chair coming apart before we managed. Eventually, the GPS unit set for the Johannesburg Civic Theatre, we whisked along the mounting patterns of traffic, his Mother Meisie in the back seat, me at shotgun. And the questions began. Within minutes, the pleasantries over, we were talking about paradigms.

The nine year old boy, his nephew to be, holds several swimming records. “But I feel fearful that big boy over there is going to beat me today,” the son told his father. And then, during the heats, instead of crossing his fingers and wishing bad luck on the boy now speeding in the water, the nine year old ran along the poolside, shouting down, come along, you can do it, faster now, faster, you can beat the record, go for it! And when that other boy did do so, the nine year old congratulated him, saying, I knew you could do it!

There are individuals who step into the light, and lift us up with them. They demonstrate the potential in us all, the vastness of our being. They go beyond boundaries. That much was my distinct privilege to see within the gleaming edifice of the impressive Civic Theatre. Gladys Aghullus, life coach to the disenfranchised, hosted. I came to teach, and was taught yet more than I had time to learn. The audience was made up actors, dancers, the blind, the mute, television and theatre and administrative professionals, the Deion of Arts, and the teachers and choreographers and technical personnel that make us all thespians, appreciators and purveyors and performers of Life. And they gave me a standing ovation. I had exhorted them to break the boundaries of the territorial imperative. I had them catching on to Psycho-geometric icons, explicated Spiral Dynamics as it pertained to the Rainbow Nation, taught the Actors Alphabet as it pertains to integration and continuity and collaboration and compassion and awareness and the nurturing of The Soul of us all. After all, which part of Everything is not everything? And in our integration and letting go of judgemental-ism and fragmentation and divisiveness and in putting people before product and in consideration of consequences on a Dabrowskian, Kohlbergian and Gravesian paradigm amongst the models of mankind, we swam together in the pool of potentiality and possibility and preferential personality inherent to character and ethics within the fluidity of our medium as a matter of intelligent choice.

They stood to applaud me. They invited me back, want me to give workshops, will pay all my expenses to return as early as April to deliver them. And they were warm and embracing and made speeches and commentaries of appreciation. But it is my entire being that rises up to applaud them. And it is my very core that is so deeply humbled and grateful to history that here, in South Africa, where once such people and I were not even allowed to congregate in a room together, let alone hug and kiss on the cheek, and hold hands, and share ideas and call each other by our first names and swap cards and talk of our common future... that here I am honoured to be of service, and also given so much to learn. Incredible that during the Apartheid Era, before 1994, blacks and whites were legally divided, quartered, and potential was dismissively deemed decidedly desiccated.

It is for the reinvigoration of the theatre arts in South Africa that these theatre professionals came to my presentation to bolster. It was the thirst for more practical knowledge, for greater interpersonal efficacy, for the methodology and management co-ordinations of theatre societies such as Calgary Acts, and at the end of the day, for an invigoration of the intra- and trans-personal habituations endemic to the passion of creative individuals that will, with awareness, augment, help to sustain, and nurture the inclusive, integrative, absorptive, compassionate and evolutionary proclivity in us all.

But lest my fancifulness of words be a mere dance in the mind, allow me here to get at last to the gist of the boundary by which we might expect one such as I, who grew up in a racist South Africa, to be restrained. The articulation of passion arises out of intrinsic energy made manifest. Some 95+ % of my audience was black. So? The blind girl, led to the stage, beat on the drum whilst the mute girl, her entire body a conduit to the rhythm, told a story of co-ordination and contrition and compassion that had the blind girl releasing her drum and dancing, dancing to the scratch and ka-boom and tap-tap of the borrowed instrument, until the music ceased and they together, in an accord of silent and lyrical integration, moved as one.

The articulation of passion arises out of intrinsic energy made manifest. There was a five or maybe even four year old little boy, one whom I was once taught to hold in disdain as a picanninny, who wore the gift of his Canadian maple-leaf pin proudly, who gazed on, applauded, held to his chair, wandered during the many speeches politely and silently, and who picked up the dropped business card for me and advanced it toward me, without my even asking; his tiny hand, advancing that essential connection to the future. Breaking boundaries.  Africa… arises.
Posted by rfpentelbury at 10:34 AM