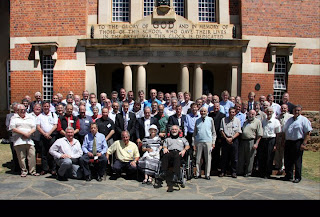 New friends arise from old places. They emerge from within the continuum of our existence as though by déjà vu and we at a single instant are given accord in the collective soul. It is so, was so, and shall be. Even those subtle distinctions of variations in the tug and pull of the journey are felt as though somehow, ephemerally, we’ve all been down this road before. And while we settle into the rhythm and the rhyme and the reason, we realize that real reality hovers around us like a hyena, waiting to devour our weakness; is that which I feel, that which he feels, for real?

Names conjure entire stories. For me. For you. And they make of things a heading in the chapters that could become books. Brian, Quenton, Ken, Vernon, Roy, Mike, Rob, Justin, Bert, Vernon, Glynn, Peter, Doc, Simon, Tony, Tony, Alan, and… well, the list goes on and on, for each unto each, ad infinitum. It is so, was so, and shall be. And some one meets in the first instance, and some one meets as a reconnection, and some one sees in the background, waiting their turn to be fully embraced. Such is the brotherhood of men.

How does one acknowledge the debt of gratitude, the tremendous sense of respect and appreciation and connectivity that so invigorates the moment, the passage of the journey, the feelings of wanting continuity, the awareness of lost time in the past? Words are but imperfect conduits transposing the music of the moment. We are bound by the fingers of fate as in a chord played on the instrument of time; it takes the correct positioning, the appropriate pressure, the precise timing to create a tune that harmonizes with the progression, chord for chord, fret for fret, string for string, and song for song. In being attuned, so do we avoid the dissonance, the out-of tune experience, and the frustration of perhaps not being able to play along.

But some of us have real brothers. I have Peter, and Andy, and now Johan. And we all have real friends; friends that have swapped stories and shared souls and made genuine connection in a free-fall of surrender to authenticity, stripping away the guard and garb of awards and accomplishments and battle scars. Those things indeed make the man more secure, make the man more wealthy, more experienced, more mature, but they still do not define character and personality. Those things of the past bring us to the present, as they were, as it was, and as it shall be. But character and personality are the things of the moment, as seen in the immediate, as continually evaluated by the other in terms of reference to the tune that one hears. And the longer the song, the longer the orchestra is kept at following the conductor, the metre, the measure, the rhyme. Accord is as ephemeral as a broken bow. It let’s loose the arrow of an intended aim, and the barb may plunge deep into the skein of one not so thick or dense or impenetrable as one might have supposed; we are the purveyors of our proclivities, and we are the molecules of the collective mind. Character and personality are the things we wear as a result of that which we are; soul and connectivity are things we are as a result of being all too human.

Johan and I were reconnected yesterday. Eleven years younger than me, I’d once dropped him on his head. Forty five years later, he forgives me, and our parents do now smile, even though they all are now dead. Such is the brotherhood of mankind. Broer for broer. All men. Amen!
Posted by rfpentelbury at 10:35 AM