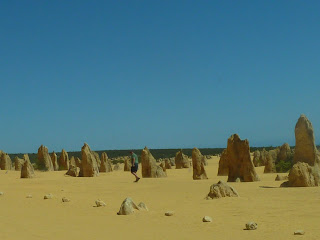 I saw it! The big grey rock flicked an ear and became a kangaroo! David pulled up the Nissan 4x4, edged it toward the bush, and opened his window. The animal sleepily ignored us, but at a toot-toot from David's horn rose from its crouch (big as Nancy, smaller than me) and it checked us out. It reached down and scratched itself, and almost yawned, and eventually did that most unique and incredible hopping motion away from us. Ka-boing-boing! Marvellous! Got the photos to prove it.

Later we saw a group of six others. One with a ‘joey’. But there is nothing like that first time. And interesting how, by the next sightings, we zip by. “Seen one, seen them all, ha!” One has a mission; we like to go from A to B. With a five + hour drive, our A was from Three Springs, west to Eneabba, along the single-tar-track Coolimba Rd  (with its eventual surprise of a glorious vista of the sea!), and then left down Indian Ocean Drive, past Green Head, down to Jurien Bay (seaside picnic lunch), to Cervantes, and then that remarkable drive into the alien’s graveyard of Pinnacles. Then on down Lancelin Road, Wanneroo Road, and finally to the Swan Valley. Travelogues are things of the ‘only if you’ve been there is it interesting’ category; unless there is truly something unique to share. Well, in that case, everyone would be astounded at seeing Pinnacles!

Expecting some sort of projecting rocks (“The brochures only show three or four,” said Nancy,) we were awed as we drove on the slow-soft yellow-sand winding-track for more than a mile or two, dwarfed in size, among a desert-dunes landscape of monoliths, remarkably evenly spaced, each as different from the other as solidified beasts, or species from another planet, stretched out all around us as far as the eye can see. Astounding. Mesmemerizing. Awe inspiring. One may stop and go among; but not climb. Most were taller than any man. Some were like the gravestones of pets. Some were distinctly phallic. Some were pocked by holes. And all around them stretched the yellow sands. ‘Look on my works yee mighty, and despair!’ It was as though they were the vast old army of Ozymandias, once shipwrecked off the West Coast of Australia, and left there as sentries on permanent guard, forever staring out to sea! ‘The sins of the fathers shall be visited upon the sons.’ Is that what the old Sand King had done to his offspring? Left them here to inherit his stolidity?

Transitions from such a landscape are awkward. There was no experience any of us had had that was anything like it. And we were deeply affected; felt it in our bones.

“So that’s why you have this disease,” Linda, Nancy’s daughter had asked, back at Three Springs just before we left, “It’s congenital?” “Yes,” I’d answered, “and also why I decided never to have children. Made a vow to the moon, night of 1969, when man made his first footstep in space; stood at the front gate and decided that the buck stops with me. Never changed my mind about it; selfish, I know. But I do what I can with my life; there are surely enough others to do what they can with theirs too.” She’d looked into me. “No, not selfish. Responsible.”

The joeys are plentiful this year; we had been told. So are the budgies. It portends a good year, good crops. Nature takes care of itself. And each of us does what we feel we must do. But as for those monoliths, so yoked together by history, what freedoms do they have but to stand and stare? ‘From dust to dust’; it is a strange phrase. In the meantime, life is to be lived! In deeds!
............................... 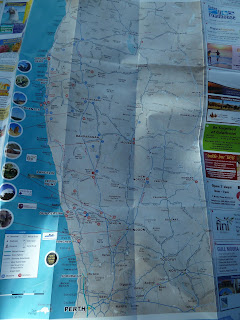 [Three Springs is at the top, centre/center, above what is no lake, but a vast white salt pan!]

Posted by rfpentelbury at 3:19 PM