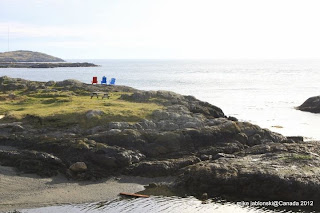 “Thar she blows!” My companion exclaims. We see the great gray whale’s spout misting high and white against the Canadian blue of Oak Bay, British Columbia. “Wow! She’s really close in!” And hearing this much, I think that perhaps ‘she’ is not a she. Interesting how we give feminine attributes to overtly large things: Mother Nature; Titanic on her Maiden Voyage; the Feminine Mystique. But that whale certainly has caught our attention. For some reason cut off from the pod and staying close to Victoria’s coast, the whale has been sighted for weeks on end by the locals and tourists alike. I’ve spotted it several times now, but have not yet seen the fluke of its tail, nor much of its body, just the great grey-brown slivers of the flesh of itself it sometimes shows above the blue skim of the sea, belying the bulk of what lies beneath.


Our sentences are like that. They emerge out of the mind and carve out a slice of space that gives voice if not meaning to the entirety of our being that lies beneath the single phrase, the sudden utterance. We purse our lips and spout. We blurt. We articulate. We surprise. We obfuscate. We just exist. And we seldom reveal all. We seldom breach the atavistic boundary of the amniotic fluid of our lives. Our need is for sustenance in the sea of mankind’s acceptance for who we are, what we do. It is what keeps our survival intact; emotional, intellectual, physical, or social. To expose our whole selves, there’s the rub.


So we lurk with our true being beneath the surface. Or we shy away. Or we seek solace. Or we aggregate in pods, clans, clusters, hamlets, towns, cities, citizenships and nationality. And our essence is covered in the barnacles of our experience, some of us bearing the cicatrices of our misalignments like the historicity of our rites of passage, with its circumcisions and mutilations of ineluctability or of choice, for even the whale scrapes purposefully at its sides and orifices to get rid of the ever present cling-ons of the parasitic mites that plague at its existence. Such is our scrape and flail at the exigencies of life itself; we are immured in the vicissitudes of other’s intentions, needs, meanings, purpose, and direction. Ineluctably. And we swim along with them, or we get lost.


“That grey whale is lost,” is the standard phrase one overhears. “Shame,” is among the responses. Yes. We have an anthropomorphic attribution toward its state of loneliness. We feel deep in the bone that resonates through the flesh of our hearts that we and it ought to be connected with our kind, to be in communiqué, to be relational. And yet for it to yield up its weight to a lightness of being beyond bone and blubber seems so sad, however natural the process. We interfere. We herd it toward deeper water. We push it toward its element. We goad and prompt and castigate and cajole, but we want for the creature what we want for the soul of each of us, to belong where it belongs, amongst its own kind. Mother Nature’s instinct, we presume, is to nurture. It is not easy to let be what will be.


Yes. A single glimpse of the bulk of it all is what often might stir in most of us the excitement of our presentiments; we seldom take time to have revealed what really lies beneath.
Posted by rfpentelbury at 2:55 PM