Sufficient Unto the Moment 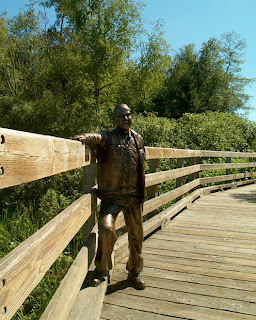 We stand in stasis at our own peril. That’s what Sam does. He stands perfectly still; been doing so for years. A fairly ordinary looking man, except that he’s bronzed by time and stature, Sam stands permanently at the railing of a boardwalk that woodenly rattles at the rest of us on our way over the Victoria pond. Sam is not his real name, it’s Roy, but I call him Sam. He looks so serenely meditative that I’m sure he’d not mind, even if he were not a statue, for the sculptor has him captivated in a stasis not only of immobility, but of reflection for the rest of his years.
Sam’s stance has him leaning on the railing, most naturally. The pigeons leave their goo on him. The rain must wash it off. People pass by, and some spare him no glance; others will stop and talk around him, about him, poke him, prod him, even write on him, but I doubt that many speak to him. And I doubt even more that people stop and stay to listen to what he has to say. Or is that, to hear what he has to mean?

Sam’s very immobility is the art with which he lives. Arresting, arrested, the kindness of his face beaming out over the pond, Sam has no judgement, no censure, no expectations, and no defensiveness in play. He’ll listen to whatever one has to say, and he’ll appear to sympathize, to empathize, to hear, or at least to give back whatever projection one may ascribe to such a one as Sam. It is quite possible he may even only be pretending to hear, as trapped in his own thoughts as he is, but that too is the way of Sam.

It does strike me as selfish, this stance of Sam’s. He has no responsibility other than to himself. He has no obligations. He need not even make choices. He need not shift, move, decide, look left or right, nor even so much as take a seat; Sam stands in stasis, ready only to receive, and ready to give back whatever one may presume, assume, glean, garner, or perceive of him. But to demands he is immobile. One cannot threaten, cajole, bribe or jibe him into a response. Sam stands inviolate, at least, in his inner core. There are about him the markings of the rude, the crude, the lewd. There are about him the detritus of the uncaring, the messy, the selfish. And still, Sam stands and watches it all.

We stand in stasis at our own peril. But not Sam. Whenever I pass him, or even think of him, I wonder if he’s that much wiser for having so stuck himself to one spot that he, frozen in the moment, has extended that moment of presence to the full meaning of his lifetime, which, given Sam’s very stasis, is bound to outlive us all. And then again, I wonder if Sam is not a metaphor for the moments in all of us, caught up like photographs and extended into the multi-dimensionality of time and space; a moment in the now when everything that we are, have been, and will be, is sufficient entirely unto the moment.
Next time, Sam, I’ll stop and try to listen to what it is that you mean. And, now that I’ve given you this much thought, I’m resolved to calling you Roy, the name by which you go. In the meantime, stay well.
Posted by rfpentelbury at 10:57 AM