The Hole in The Whole (from a chapter of my novel) 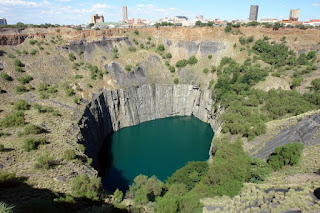 A boarding house friend's borrowed front wheel now on my bike, my old flat one tucked under my left arm, the spanner in my pocket, I pedal hastily through the lamp-lit streets. Only the moon peers at me occasionally from between buildings, or as I round a corner. At my feet the old stars of the reflector strips whirl and whirl until I come at last to the familiar wire-fence surrounding the Kimberley Big Hole, locate the old crawlspace that we boys have used since making it over three years ago, and stop.

Quickly, I exchange the front wheels and hide the borrowed one behind a big clump of prickly cactus, obscene in the silvery light. Then I push the bike closer to the wire fence that surrounds the giant crater, hoist the handlebars to a cling over the top barb-wired strands, and let it hang.

Next, I slide on my sweat-soaked back through the tight wire-gap. Carefully, I keep the old rusty slice-sharp prongs away from my face. Ha! I care. I still care! Given my plan, the subconscious one surfacing from within me, it is strange to care anymore. On the rusty wire, wobbling and jangling like a skeletal curve-horned buck, the bicycle and its reflectors blink. I shoulder and buttock and heel at the ground, then I’m through.

The diamond patterns in the criss-cross wire fence serve for toeholds as I climb to reach the handlebars. Then, as savage as a leopard at a deer, I tug. It's stuck! I try to wrench the contortions of the contraption up and over but it pulls heavily, then sticks tight, its saddle caught. I growl, clench tightly, and throwing my whole weight downwards, kick with my feet at the fence and wrangle at the writhing cycle until there is a sudden tearing sound as the spiked wire rips through the seat-leather, and the whole thing comes free, too instantly, and I fall with it nearly atop me in a loud clatter, its pedal-strips spinning brightly.

A dog at the houses on the other side of the road sets up a noisy alarm.

I grab up the bike up and scoot off with it into the deeper shadows of the humped and hardened mine dumps. But there is no sign of pursuit. I push the bike further through the soft gray-blue sand and the rubble alongside the ragged lip of the dark-throated crater. And I grit my teeth; the now dead boy who'd stolen it from me had pushed the thing just like this; and it had got him back! Thrown him into the path of a car. I just have to get rid of it!

At the edge of the pit I pause. The Big Hole gapes grimly. In the moonlight the cliffs at my feet descend and descend, then slope off in a shelf, before slicing straight down again. Like a rock-hewn funnel, the pit is more than a thousand feet deep, by more than a mile or so across. The black earthen humps around it can hardly account for the volumes of soil that had once been excavated. At the bottom is this great silvery gray-green lake, bound in by sheer rock, yet perhaps no more than an aggregation of scummy water collected over the decades. Some spindly looking trees clutch to the slopes here and there, like the sickly shadows of so many desperately clinging men. The projection of the slope below me is the problem; I need a free fall.

I loosen the knot of my school tie, and then shove the bike onward, alongside the lip of precipice, until I reach the distinct prominence that the other boys and I have at times stood on as the only likely platform from which to hurl stones all the way to the bottom.

Even now, as I take up and hurl a fist-sized rock into the blackness of the void and listen for the distantly muted, plop, I catch myself briefly wondering about the old problem. On the formula of speed-equals-distance-over-time, we’d tried to work out the depth by counting out the seconds as we listened for the splash. But always, the answers would vary, although we know the museum records to reflect the average depth at 1,335 feet.

I put down the bike, fasten the tail end of my school tie to the front rim, double-knot the wide end as a hand-grip for me, and then stand up. “Here we go, old friend,” I breathe at last, and feel tears run down my cheeks.

Dragging it first even closer to the edge, I begin ever faster sliding the bike round and around in the dirt, before it becomes airborne, and holding tight and whirling in the dust, I finally feel its centrifugal force take over, and I let go.

The bike sails flatly away from me and over the edge and into the blackness. As brief as flitting fireflies the spokes twinkle, and the pedals sparkle, and then the thing is swallowed down deep. I listen, it seems forever, for the expected splash. And just when I think that I’ll have to return in daylight to find some way of dislodging it from a shrub, or the face of the lower slope, I hear a faint gargling swallow echoing up from the well of that great dark throat. Hau!

“Eyah!” I scream back, loud and raw and ragged, so that it resounds over and over from the bowels of the cauldron. “Eyah; Eyah; Eyah!”

But it gives me little release.

I sit down on the rockledge over the darkly yawning abyss. Thick black silence issues in almost palpable densities from below. Away in the distance the dog still yaps unendingly. Above me is the leaden night, like a broad smudge of gray paint holding the beleagured moon up against the face of the universe.

Why not jump too?

I blink. And shiver. And need to stand. And struggle to rise on stiffened joints and aching muscles, and suddenly wobble and tip toward the gulping void.

“Whuh-ha!” I sit down quickly, and dig into the earth with my fingertips, my heart thumping. Then I laugh out loud at my own foolishness. Eyah! I very much want to stay alive!

I shake my head. The thing is over. But why do I not feel free?
Posted by rfpentelbury at 4:48 PM