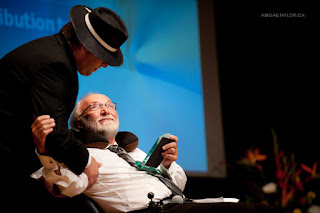 Richard: [wheels on, pauses, scans crowd for getting grounded in 'the now']
Thank you, the Awards Committee, I am deeply honoured by your selection of me for this year's award.

There are very many among you who could have been selected for this award tonight; may yet be selected as the years progress. It's a question of not being overlooked. Now, given my physical and geographical stature in this wheelchair you'll say it's easy to overlook me, ha!, but that's not the kind of overlooking I'm talking about. It's that you, who toil so diligently on behalf of us all, be not overlooked: The seamstresses, the prop gatherers, the set painters, the costume and stage and lights and program and production personnel. You are the ones who spend countless unseen if not lonely hours doing what you do, on behalf of us all. But more important than you yourself not being overlooked, is that you yourself do not do the overlooking.

We live in theatre for the reward of giving to each other, especially in amateur theatre. Almost every one of us here does these magnificent shows for the sake of collaboration with our fellows. We give to an audience who pays, yes, but who pays us only with applause. Audience money goes to the company, to the next show, never to us. So we give each other thanks, and every little card you write, every 'thank you' you give, and each time we award someone in this annual event, we show proof of our not overlooking another. Well, tonight it's my turn. I humbly accept your thanks, and I give my thanks too. I know I receive this award not nearly as much as a result of my own efforts, but as a result of all those who have supported me along the way. And that, as for many of us, includes also the, uh, fortitude of our significant others, as in my case: Linda Michelle-Pentelbury.

Now, given that I came into the Calgary theatre scene with Storybook in 1981, a listing of names significant to me is definitely going to leave someone out. Take, for instance, my own guest of honour sitting in her wheel chair up at the back, Hilda Doherty. Now almost 94 years old, Hilda at 80 was the brilliant star of my show Glorious and Free, back in 1996. Then too, only a few here were lucky enough to work alongside the brilliant and talented Jim and Tina Sarantis. Others, like Pasqualina, and Andrea White, and David Gagnier have gone to other cities. So too just think of the huge contribution of a Diane LeBlanc, of an Alana Gowdy, or a Gerry Hemphill, or, back in the 80's, Ellie Tims. Each have had enormous influence and impact on me. And right here there are people I've depended on year after year, like the incredible Cat Bentley, Dennis Daly, Tim and Linda Elliot, Joanne Sampson, Wilma Rothbauer, Frank and Faith and Angie and Margaret and Christine Horne, and then there's Richard Heyman and Mike and Caren Johnson, and Val and Greg and Jay and Lynette Newman, and Karen Iwanski, Paul Hilton, and the phenomenal Pat Becada. Where should I stop? It is Diane Le Blanc, as I recall, who was awarded the first Sandy Singer Award, followed by people we all know and appreciate, such as Paul Stanton, Bill Torrie, Amanda Chapman, Tim Elliot, and...

Well, there are two individuals I want to thank here especially, for they exemplify for me what our community theatre is all about. The first is my 1988 Grade 8 student, Mary Anne Wilson (now become Mrs. Wickerson). Mary Anne not only performs, but has served as musical director in countless productions since then. The second is my 1989 grade eleven student, Sean Anderson. After doing 12 shows with me Sean started Morpheus Theatre, 15 years ago, and thanks largely to him Calgary-Acts was born! Sean too, in 2005 (?), was a recipient of this prestigious Sandy Singer Award.

But for me the most important person of all, and I submit, to you, is Penelope. [pauses, looks at aisle]. Come up here, my dear. [mimes receiving her] Penelope is the actress upon whom our theatre foundations are built. She represents the brand new, untried, inexperienced, and first timer. Now, lest our want of these awards preclude the Penelope's of our world in our quest for only the best, I would caution directors at the audition table; we want to welcome new blood! As for her male counterpart? [indicates aisle] Well, come on up! [mimes a welcome hug, 'agh'] Allow me to introduce someone many of you may know: Harvey! Ladies and gentlemen, let us not overlook those who appear invisible. They may become the star! Let us see and thank each and every one of us. All for one, and one for? [cocks ear] ...One for? [audience:]...All ! Thank you. With this award you send me off to retirement with a heartfelt Bang, and nary a whimper, indeed. Yes? Good night. [wheels off]
Posted by rfpentelbury at 10:45 AM