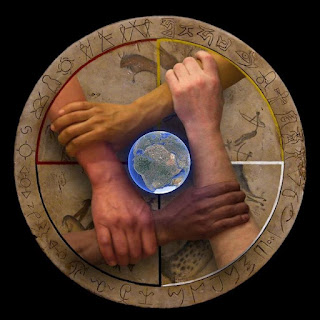 
Authenticity breathes. It enlivens my every struggle. To be true to the self, for me, is to be in a continual sea of the state of a conscious awareness. Still, was it not for the anchors of others, where might not my own ship sail?

One is born free; yet not so. Immediately a host of attendant others pluck and pull and direct and promote and influence. One becomes a race, a culture, an accent, an ideology, a persuasion, an education, a label. Layer by layer, one adapts to the exigencies of time, circumstance, family, community, country, world. And in the universe of alternatives, and in the potential for variances, one is eventually isolated and named and given value by others according to the relatively minute passage of history that becomes the voyage of any given soul, or not. He was a Colonel in the Chinese army. She came west with the Jewish Diaspora. He fought as a subaltern in the Boer war. She grinds corn in Oaxaca. He stood guard at Hadrian’s Wall. She was Queen. So it is for all souls, or not. For not all souls are left with a historical identity, as given by others. Runhard Spearthrow, for instance, who lost his life at the time of the Mammoth kill, was just another hunter. In fact, he was an only child, and since he had no wife, and since his parents were both dead too, there is no one even to record or to make mention of him anymore. Ah well. He sure threw that spear hard! Remember the time that he…, no, I’m thinking of someone else.

Authenticity struggles. Who am I? Really? When that bit of energy that is undeniably me found its body and then became an ego that necessarily asserted itself as an ‘I’ (even as a bird-house chickadee-chick squeals at the outside hole of light that feeds its existence), what chance does one have to be anything other than the set of circumstances into which one is delivered and is nurtured by the incidents of geography and enculturation? Is it in the states of enlightenment in which one finds one’s consciousness awake? In our modern world a baby is now easily born geographically ‘out of place’ and the affected offspring is spirited by another race and grows up perhaps in an altogether untraditional, unconventional, untoward, perhaps unresolved and even unexpected surroundings. That might have been my lot when the small plane carrying me in the basket coughed alarmingly, thrice, as we passed over a deserted island. Did Tarzan not struggle with his authenticity too? Who am I (?) seems so selfish a question: am I not the product of all that courses through me? Communist, Buddhist, Christian, Jew. Such labels!

Authenticity is iconoclastic. I’d like not to do this, or to have to do that, or to go there, or to have to pretend to this, or to worry about that, or to have to remember that occasion, or to fess up to that past, or even to contemplate this future. I just want to be. And in the ‘now’ of my being I’d like to feel complete, like the completeness of ‘the now’ in the moment of plucking up the preferred pebble that appears the right one for the intricacies of my pebble-picture. Yet should the moment be knocked aside, or the picture trampled, then I simply engage in another, or walk altogether away from my intention. Engagement in some other ‘now’ can be complete, content; I am aware that my preference itself is not the answer to my authenticity; simply being is. So may I become known not as the spear-thrower, but perhaps as the pebble-placer, ha! So be it. A life birthed, lived, and left, for any one of us is full of moment by moment. Now is the moment. Anchors away, indeed!
Posted by rfpentelbury at 4:43 PM