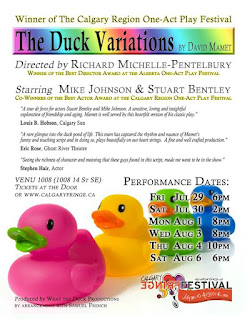 It is dead. All that effort. All that energy. Dead. The little chickadee fledgling lies in a heap of flustered feathers and frozen claws, and as I bend down to it, ants pluck at its eyes. So soon?

A few hours ago, before I left the window for my meeting, I’d watched a parent coddle the chick from branch to branch, find foodstuff after foodstuff to lure the little shivering thing along. And not ten inches from me, on the other side of my living room window, the other blue-grey parent with its black cap leaned from its perch into the dark hole of the bird-house and fed some other unseen chick or two. But my own appointment called.

At The Morpheus Theatre Board meeting I wait. Thousands of hours’ worth of effort has gone into the company’s fruition. It too was a fledgling, begun in 1994 by a student of mine, Sean Anderson, when from his height up a ladder while adjusting a Fresnel in the Bowness Theatre he, deus ex machina like, acceded to become the comptroller of what two other graduating students, Justin and Patti were proposing to initiate. But the three of them eventually parted, and Sean continued to steer the company through season after season, garnering awards for Morpheus shows, and prestige for its name. I joined them ten years later, as its resident director. In the meantime I’d served as artistic director for the Liffey Players, and directed shows (and occasionally performed) for other theatre companies, such as Story Book, and Front Row Centre, and Bonavista Players, and Oh Canada Eh!?, and then there was Broadminds Theatre, and Workshop Theatre and… but any listing now is like so many sandcastles. Sometimes there were as many as four shows a year. And in those 30 years thousands of hours of work and care and contribution from a host of caring people has added to each moment. Each show was a process and a product, distinct, different, successful; rewarding. Shows like Carousel, Evita, South Pacific, Jesus Christ Superstar, Camelot, Educating Rita, Fiddler on the Roof, Pirates of Penzance, The Gondoliers, Tuesdays with Morrie, Patience, Harvey!, and…. And then came the final curtain. But now I listen again to the present meeting. Thanks to old Sean, Morpheus at last has found a new location, renovation will be extensive, the new season is discussed; the new nest begins. Tim Elliot, chair, asks, “Any last minute items?”

“Well, I’m retiring from theatre,” I announce. “My physical condition needs more care; i need now to conserve my energy for writing, painting, and reading.” Amongst the reactions, this question: “How do you feel about it?” I smile. “Happy. One can make the most intricate pebble-picture and somewhere in the process the eventual product, before it might even be a product, is whipped up by a sand storm (ha!), so one may as well find joy in the very process of placing each pebble, moment for moment, such as it is. The selection, the colouring, and the placing of the sand pebble of each moment within any show was the joy, is the joy, and the product lies in the up-to-the-moment of any given moment; so now I get to feel good, moment by moment, for what each moment was worth, is worth.”

And then I came home to that dead bird. All that effort; ‘gone.’ Hundreds of hours of searching for food, and then feeding the fledgling toward what was intended to be a full grown product. I sure hope the parents ‘enjoyed’ the effort! Moment for moment.
Posted by rfpentelbury at 12:58 PM