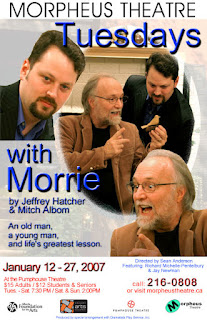 Hank hung in there. He lay trapped in the rake-thin bones of his being, his skin a parchment testifying to his 60+ years of living. He no longer could breathe without the apparatus that pumped oxygen in, sucked it out. He no longer could move his tongue to speak, or turn his head to see. But at least, five days ago at the time of this writing, he could smile at me; show the light in his soul. For over two years I’d visited him weekly, usually on Friday afternoons, and recently went more regularly, almost daily. A dying man appreciates a familiar friend.

Often, Mrs. Jessie Peters accompanied me; she’d lost her husband, Vic, two years ago to the same disease, ALS. And since Hank and Vic were friends, and since Vic had become my friend in the course of my performing as ‘Morrie’ in the play about ALS, back when I did it with Jay Newman, and since Hank had asked me after Vic’s funeral, three times, to visit him too, I’d begun the visits, their regularity increasing as I came to love the man that Hank is. He is!

But even as I wrote this the minutes and seconds were ticking to a close for him. “You’ve so little time left; I treasure the gift of it you give me,” I once told him. He looked into me: “It’s you who brings me the gift of time,” he responded.

Time. My watch eventually stopped ticking. It lay deep in the crevasse of the couch seat; quite lost for these last two years. I’d often thought about it; wondered who’d found it; perhaps inadvertently crushed it on the road; or who perhaps was now wearing it. Like a tried and constant friend it’d been kayaking and swimming in the ocean for over 13 years of summers with me, seen me through the last six years of multiple changes too. And I knew where the scratches and nicks on it had come from. But with its loss its history had become a memory, no longer ticking with instant and accessible vitality. 101 goodbyes. Silly how we can miss a mere thing. And then yesterday, I found it! Dead, but alive with potential. Dead, but alive with memories. Ha! Even its brand name is symbolic: Pulsar. To revitalize it, it surely only needs a new battery?

“How’s ‘Tuesdays with Morrie’ coming along?” Hank asked me this last June, knowing that Donovan Deschner and I were mounting it on behalf of ALS and dedicating the show to him. “Been wrestling with the meaning of one of Morrie’s lines. What do you think of this? ” I responded:

“Forgive everybody everything! If there is anybody that you care about that you are fighting with, feuding with, let it go. Let it go! Even if you’re 100% right and they’re 100% wrong you say you’re wrong if that will end it.”

My eyebrows lifted. “Ha! Sounds like he’s telling us to be false, yes? What do you think?”

Hank looked at me. He sat strapped up in his power chair which he moved by means of collar pressure pads around his head. He said, “One has to die to the ego.” Then his eyes twinkled and he took in yet another painstaking breath before saying, “But I’m not there yet! Ha!”

Hank’s being continues to tick away in the memory of those who have known him. His photos, over 300 of them, enhance Google Earth maps almost everywhere in the world. Click on Paris and you’ll see photos by Hank Geerlhoff. Click on Yemen, or Russia, or in your memory and you will find time ticking away with the current of vitality that is life, that was life, that feeds the life to come. And the 101 goodbyes to the things and to the people one knows also become hellos as we visit and revisit the current of all that is, that was, and that will be.

Tick, tick-tick, tick! The revitalizing is up to you, or me. 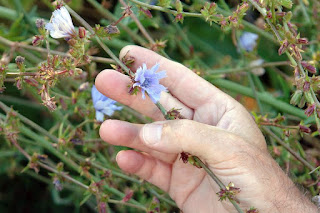 
Posted by rfpentelbury at 8:41 AM