A Slice of Evil, Anyone?

Evil explored is fascinating. Or macabre. In the guise of The Demon Barber of Fleet Street at the Pumphouse Theatre, it was mesmerizing. Sweeny Todd comes with sufficient forewarnings; many have seen it before, heard about it, or at least have a sense of what to expect. But to render it last night into the suspension of disbelief that affected the Front Row Centre players under the clever direction of Bill Torrie went beyond the moment. It was a performance likely to resonate in the mind for a lifetime.

Not my cup of tea, I thought. Not my kind of music, said a friend, but they sure sang well. Not my kind of subject preference, said another, but they sure kept me engaged. No, not quite my predilection for a play, said I, but the performance was so profound that I found in it a vigour and depth and inspiration that redressed my every presumption. In short, the show was a virtual eye-opener, a smorgasbord of visual delights, an array of colour and chorus and orchestration and performance of character that in Calgary entirely augments and continues to cement the oeuvre of offerings amongst our very many commendable community theatre companies as entirely worthwhile. Still, as yet another friend joked, it’s not quite my slice of pie. Ha! But we all agreed; we’d tell others to go!

Evil is difficult to believe. Our reaction is almost always disbelief. He did what? They said what? No! Evil is intentional. Evil is self-serving. Evil is negative. And so, given that Sweeny Todd as a protagonist, tortured of soul and twisted in vengeance becomes an indiscriminate executioner, we become mesmerized by his ministrations. We don’t? Then why is there a show of such dark content to which we flock to see? But if Sweeny is so obvious as a protagonist, it is his insidiously evil partner, the lurking Mrs. Lovett, whose pervasive psychology of ponerology (an ancient Grecian term for evil) that permeates the pies. For love she lies, cheats, steals, butchers, bakes, and self-deceives. In the exposition of evil, Sweeny Todd is a tale of woe, a tale of darkness, of disillusion, of lust, revenge, hate, envy and greed. Those deadly seven sins abound. No, not quite my cup of tea. And, no thanks to any one of those pies!

But evil is relieved in the counterpoints. Birds in cages proffered to Joanna are bits of light awaiting re-unification with heaven. Joanna, unknowing daughter of Sweeny, ineluctable ward of the diabolical judge, and love-interest of the honourable, ethical, virtuous and white-clad sailor, Anthony, is imprisoned by circumstance and event and then lunacy. But she remains grounded. She evokes centrality. She becomes the fulcrum upon which all our fortunes revolve, for were she too to be immolated we’d find ourselves entirely overwhelmed by the cut-throat reality of evil left unchecked. Or at least, I would.

Brilliantly directed and designed by Bill Torrie, intriguingly depicted and deployed, the cast and crew brought Sweeny Todd into consciousness that outlives the moment. The very ache for love that Chris reveals in his wonderfully truthful rendition of Anthony pining for Johanna, as played so charmingly by Krista, sustains the hope and potential in us all. And the belief with which the spirited Carlyn, Gregg, Jeremy, Tarra, David, Kirk, and Jomar played, along with a truly stellar chorus, made all the difference in this particular audience member being altogether swept into Fleet Street. The musical is an absolute “must see,” whether or not evil is your cup of tea! 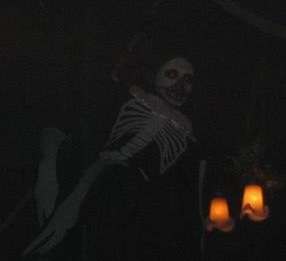 Posted by rfpentelbury at 1:10 PM