Reflections after the Dali Lama 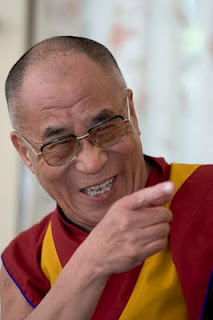 I’ll show him! That’s my thought as on led-foot-edge with the big white Dodge revving beside me I watch for the green light. I’ll show him! That’s my thinking despite being at the Dali Lama’s address last night. Peace and compassion is one thing, but that Dodge had been rude, aggressive, and now I’m going to show him! But first I put my vehicle in park and awkwardly bend over the gear shift and scoop up the contents of my spewed satchel that had fallen off the seat beside me as I’d hard-braked to bring my rush at the light to a sudden stop. I hastily grab at things and slide the auto-shift back into gear. The Dodge abruptly roars. I glance up. The light is still red. Well, I’ll show him! He’d chased me down Fourteenth-Street, nosing at my rear, harrying at me to go over the posted 70 km per hour, despite the fact that the police often wait under the pedestrian fly-over. But I’d held to my spot on the road. So had others. Now… well, I’m sure going to show him!

There had been over 20,000 of us at the Dali Lama’s address in Calgary’s Saddle-dome Stadium last night. He’d sat red-robed in a lone pool of light and spoke of simplicity, of a need to understand and to allow for the differences in each other, of a need for us to act more from the heart and less with our head, of a need for us to have a sense of being the same as another despite the differences of culture, education, background, circumstance or event. And close to his finish he asked that all the lights be turned on so that he may see us, and when they came up I was astounded at the virtual sea of humanity, yoked as one by the luminescent white scarves we’d each been given at our seats, gleaming in wave upon tiered wave in the giant insides of the egg-shell oval of the covered arena. One people. One purpose. We came here to give and get Compassion and Love.

But now the Dodge roars again, and the light is about to…. I’ll show him! In the split second of the red light dimming I ram my foot down on the accelerator and feel the powerful growl and surge beneath me of my vehicle being shot… backward! In my rear view mirror I see the eyes-wide-open horror of the woman’s face behind the steering wheel of the car I’m about to back into and I jam down on the brake and hear the squeal of my tires and wait for the awful crunch… but miraculously, I come to a stop! I grin apologetically into the mirror, flick the floor-shift into Drive, and screech away.

The Dodge is gone. Other cars are now ahead of me. I relax into my mission. Get there in one piece! Or is that ‘peace’? Behind me that lucky woman is driving a black Mercedes. That would have been expensive! That would have been stupid! That would have been…. My brain whirls. I am so full of myself! So full of me! Just last night I’d lifted up my portable wheelchair to my vehicle in the parking lot after the Dali Lama’s address and wondering if anyone was watching had not focused on ‘the now.’ It slipped, caught my glasses, and they gouged deep down my nose. Blood streaming from me I’d applied a tissue and continued to drive, but in my haste to get home turned left while a pedestrian was not quite across the walk and he’d given me a rather vicious glare. “Go ahead,” I blurted through my window, “Glare at me again as though I’m an idiot!” Ha! Despite almost 60 years of living, defensiveness can still be the veneer over the real blood in one’s veins. Then again, ha!, upon reflection, and despite almost 60 years of living, one ought still to check that one is in the right gear!
Posted by rfpentelbury at 9:17 AM