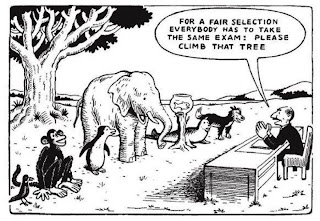 Comparisons tend to separate the wheat from the chaff. Eh? Even so, it hardly seems worthwhile to go on about the differences between ant and elephant, bunny rabbit and frog, child and adult, boy and girl, or... Yet we persist. We put up competitions as a means by which we inspire ourselves or others to get better, to try harder, to prove our worth, our value, our very existence. "Wha'dja mean you're afraid of the water?" said one fish to another. Ha! There are basic expectations endemic to a species that will brook no countenance. And within a species, especially a thinking species, we love to set up gamesmanship, competition, awards, and hierarchies. It is in being inept and unequal that those of us who feel different, are different, appear different, and even desire differently are the ones who become marginalized to the role of spectator, if not 'the also ran'. And how such an one is to feel fulfilled, to feel worthy, is... up to the self.

Auditions for a theatre show, tryouts for a team, singing competitions, heats before an event, time allotments for distances run, awards for academic distinction, awards for participation, certificates to prove accomplishment, these are all measures by which we may discern significance, may determine worthiness. But what of the inept and the unequal, eh? What of you and me? After all, there is only one gold medal per advent.

Ever changed a car tire? Ever baked a cake? Ever run a sewing machine? I knew someone who'd never cut bread. Ever ridden a horse? Been on a motorbike? I know an adult who still fears to try a bicycle. Ever not won any award at all? Ever not come first? Ever not won a single thing, such as at bingo, or at least a free coffee on a Tim Horton's 'roll up the rim'? Ever felt completely 'less than'? After all, in races, someone comes last.

Comparisons separate us out. Even a race in one's own age-category will segregate. We take in differentiations of height and weight and strength and looks and wealth and dress and energy and voice tones and... Well, there are a lot of things by which we determine differences. A cup of coffee is not the same wherever you buy it. Wine has distinctions among others that is almost entirely wasted on my palette. Trifle is better than pumpkin pie, for me, any day! Comparisons signify! The trick is to accept what is.

Being worthy all by and for oneself becomes the great quest for the individual. To like, love, appreciate, value, find significance, simply be sufficient unto oneself is no mean task. How else to give others such honor? After all, there is so very much to gainsay one's fundamental right just to be. Look at the homeless, the wastrel, the couch-potato, and try not to wish them otherwise. Look at the immature, the indolent, the inept, the indifferent, the apathetic, and try to accept them, love them, like them even, just as they are. Integration is a real challenge. At its fullest it is about absolute acceptance for what IS. And since all that IS does exist moment by moment, and changes however slightly by reason of its being in the flow of what now IS, each and everything has its place; all is exiting within its potential. Yet it is that very potential that so invigorates man to want to make the most of everything, to alter what is given, to drive faster, climb higher, and harness the probability. Horses are ridden. Dogs are trained. Circuses get made. And, if lucky, the inept and the unequal get, if nothing else, to be good for a laugh. Or not, eh?
Posted by rfpentelbury at 10:29 AM