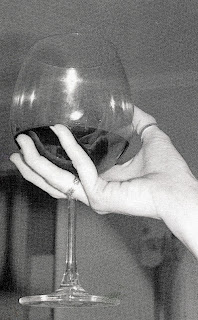 When the crash came, it was awful. My wine splattered like raw red juice from a smashed pomegranate. The glass did not break, but toppling as it did from the
imbalance of my setting it down on the rounded edge of a small hors-devours knife, and my unwittingly letting it go, the clash of glass on top of glass added greatly to the commotion. Our new friends leapt to my defense. The white cloth of the nearby couch was crudely spattered. The cream pattern of the rug was splotched. The wine ran across the living room tabletop and gathered in pools amongst the small plates of meats and cheeses, then overran the table like a blood-letting waterfall. It saturated the pale blue of the carpet. Aargh! But our friends damp-mopped and made nice excuses for me about the event. "Wine stems are too long, anyway." Nice. Yet it was only my second big mistake of the night.

Ever been caught doodling graffiti on the headmaster's portrait and then finding out that he was overlooking from behind your shoulder? Ever been caught passing notes at school? Ever wished your hand was not in the cookie jar when the owner of the kitchen walked in? Ever posted the wrong letter in the wrong envelope? We sometimes make those sorts of mistakes. This modern-day convenience of typing on an iPad with its auto-correct typing will sometimes yield up words quite different from those intended; it becomes imperative meticulously to check each word, each address one intends to send to, before pressing SEND. If there is a Penelope H and a Penelope C in the address book the thumb easily presses the Penel... addresses, and both addressees inadvertently get loaded to the SEND TO box. Should there then be other addressees to whom one also wants to send the letter, one adds them, SENDs, and... Oops! Much harm can be done to those receiving letters for whom the words were not intended.

Ever been magnanimous and gracious? Ever not taken things personally and even seen the humor in things from another person's point of view, even if you are blind, or cannot walk, or are in perpetual pain, or have just recently lost a loved one? Other people's inferences, their bandying about with particulars, their informality of intentions are awkward moments by which one's character is tested. Children will swear awfully when adults are not present. Hyperbole, metaphor, analogy, and metonymy are all part of the parcel with which we engage a topic among those in the esoteric enclave, those in the know. Ask any group of school boys. If they're brave enough they'll fess up, let you in, reveal their codes, even apologize for what may have seemed crass, unthinking, and insensitive. Some boys are champions of integrity, given chance to face the music.

Such was the reaction to my faux-pas of last night. The wine was mopped up. The error of my not checking to whom my email was being sent was graciously, quickly, and most courteously addressed by all the receivers. I got to witness how the friends around me pretty well did all the work to rectify the mistakes that I made! Thanks; how humbling.

The proverbial third error? It would subsequently be not to notice, not to care, not to think carefully about the moment by moment actions of existence. From now on I'll observe the NOW, so that I may become perfect! Well, at least until next time. Aargh!
Posted by rfpentelbury at 9:46 PM