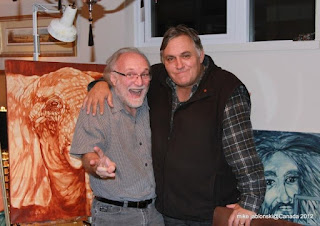 Great elephants can move with careful grace. They have a power and presence that resonates. To have been close enough to have breathed near one, especially in its natural and unfettered state, is to have a certain sense of privilege, of awe at the sheer magnitude of potential inherent in the being. And when that massive aura of their magic in the meeting has passed by, moved on, there is a sense of having had one's existence blessed. At least, that's how I felt when he left. My friend. What's more, he took his lovely wife with him, and as partners, they had visited my space and filled it with love.

Love has no attachment. The wine bottle they brought, having been had at dinner, was put into recycling. The coke bottle from which he drank, that bore his fingerprints, went into the same bin. The plates, the cutlery, the crumbs, these are not the things by which one might retain a sense of the presence of missing friends; it is the feeling that lingers in the core of one, even as I write, some two or even three weeks later. In fact, the books on attaining one's dreams that they brought, or come to think of it, the relished box of Godiva chocolates too, are all objects that are deeply appreciated, but for which we bear no untoward attachment. Nor is it that we went here, or there, or that they were with us when we drove to... These are not the memories that matter. These are not what real memories are made of. In fact, the facts of such memories eventually will change; I for one will not, cannot remember what we had for dessert.

Love is a sense of utter acceptance. There is no wish to change whatever the other is. It does not compare. It is not jealous. It does not cling or demand or expect. Love is a feeling one gives. It does not even need to be returned. Love is a spontaneous feeling that arises even when thinking of the other. It is not halted by borders, by continents, by seas. It endures in the memory, elephant like, through the decades. Indeed, is there not some sort of famous biblical parallel to add to this? Worth looking up. Love has no end.

And so, when the next day came and it was time to see off my friend, the great elephant, before he and his wife took off to other ventures, I stayed in my chair at the floatplane docks and watched the twin-engined otter, or beaver (but it certainly wasn't a Cessna, was it?) slowly throttle its way along the Victoria harbor entrance until it eventually disappeared toward its wave-tossed take-off zone. And they were gone.

Love. It is larger than life.
Posted by rfpentelbury at 12:59 PM