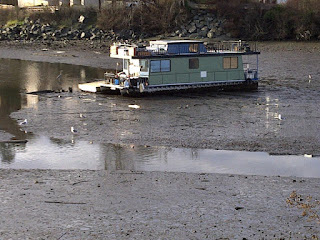 It broke free of its moorings some weeks ago. The storm was not that violent. It did not whip up waves of discontent. It did not knock other craft against each other. It did not reach into the innards of the house- boat and wrench at the heart of it; it merely plucked up the anchor and then set the whole home adrift.

Rudderless, directionless, I did not even notice the change. Perhaps the thing lost its bearings in the dark. Perhaps it came loose in the energy of the height of the storm. What with the distraction of the winds and the casually frequent whirling of free flags of emptily floating bags that once were full of foodstuffs or other things, I was taken by surprise to find it suddenly adrift. Perhaps I was too inundated with other perceptions to realize that the grounding was no longer there. Did not see it as it came closer. Nor did I notice it getting stuck. It was only after it appeared to me in an unusual countenance, in the full light of day, that I was given to remark about it at all. But now it is as bulky and intractable as a great wart on the moving mirror of the inlet. And at night I can imagine the creaking of its skeleton, feel the thrust of the rock that perhaps tears up at its spine, grinding the thing on the fulcrum of its capture. There is no one there to care for it, then.

Stuck on that tidal-hidden rock in the muddy shallows of Celia's Cove, over which my vantage directly peers, I note the houseboat's forlornness, its lack of occupancy, of captainship, though the potential of its promise is so distinctly there. It has been visited by the coast guard, by other boat-owners, circumnavigated by curious kayakers, but it has not been entered, least ways, not that I can tell. The bulk of it is listless, pivoting around a point of no escape, needing some guiding hand to get it on the move again.

We humans are not like that. Are we? We might be moored for a moment or two, even perhaps mired in the mud for more than a month at a time, but then we grab at the life lines of thoughts, feelings, friends, and move again. Not so for that houseboat. Should it be perforated by the rock it will sink, rot, die of neglect. Thank goodness we humans are not quite so easily set adrift, eh? We have so many resources hovering around us. We have so many instigations, prods, nudges, tugs. We have the interest of others within which we feel compelled to answer to our call. And we have a curiosity about the birds and bugs that settle on our surfaces, an interest in the fish as well as the demons that lurk beneath our passage. We are not given to being tied down, yoked, captured, or even tamed. Or are we?

In being adrift there is great potential, not necessarily of danger. But the implication that one is unguided (if not misguided) is clear. Theroux would have it that even without a paddle a person can still will one's boat ashore. It is the very yoking of one's energy with an eternal energy, perhaps, that allows for just such an instigation. We move in a kind of prayerfulness with all energy when we have direction, purpose, though many may not quite equate their everyday intentions with such terminology. Still, one avers, we are at the very least, one hopes, not really adrift. Or are we?
Posted by rfpentelbury at 10:51 AM