Pin Pricks in the Dark 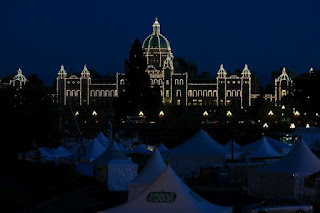 
The “Victoria Splash” is very special. Forty thousand people congregated around the Philharmonic’s huge barge in the harbor, the sonorous music swelling from the cavern-like tent over the orchestra, the multiples and multiples of people with their own portable deck chairs seated in rows and rows from the dock-side edge along the ledges of the sea wall and up across the sectioned off streets and over the great lawns in front of the majestic Empress Hotel and the imperious Parliament Building. In the four-hour slowness of the Canadian setting sun, in the seemingly made to order absence of wind-gusts or broiling clouds, in the calumny of the choreographed swoop and dive and glide of flocks of silent sea-gulls, in the riveted attention of the vast and superbly polite audience, in the clarity of excellent sound, the harmony of accord and appreciation of both raw and tamed beauty all around the Victoria Splash, held annually at the beginning of August, is the island city’s front-yard celebration of a lifetime.

Kayaks and rowboats clustered and clumped and clanked gunwales in front of the barge; the best seats in the house. Two daring-doers, gaining attention, sat atop precarious lawn-chairs on their paddle-floats.  Around my partner and me, as far as the eye could travel in amongst the myriad people, there were no police, no authorities, yet there was no alcohol, no smoking (although the sipping of a sherry would have given a touch of sophistication to my sandwich, and the aroma afterwards of a pleasant pipe would have been peaceful), there was just a munching here and there of sandwiches, cherries, home-made cold-salad dinners. Some people had purchased hot-dogs from nearby vendors.  Later, the smell of caramelized popcorn drifted enticingly amongst us. Some people had been there since early afternoon. We’d arrived soon after four. Others were still coming, and the press of bodies around and behind us grew denser and denser toward the magical 7:30 start time of the Orchestra as the main event.

Virtuosity does not necessarily arise out of a single person; it can be a collective of thousands of fingers and movements all streaming together to arrive at a perfect accord. Yet the virtuosity on the violin of the eleven year old girl, Alice Haekyo Lee, was truly mesmerizing. It was as though time stood still as she played the first movement of Bruch’s Violin Concerto No.1 , introduced by concert-maestra Tania Miller, herself the consummate public orator and gifted synthesizer in articulating a spectacular night of conglomerated citizenry, colorful flowers, co-operating weather, and resplendent sound. The orchestral pieces of Jarre’s ‘Lawrence of Arabia’; Moncayo’s ‘Haupango’; Strauss’ ‘Roses from the South’; Rossini’s ‘William Tell’; Saint Saens ‘Sampson and Delilah’, J. Styne’s ‘Gypsy’; Coates’ ‘By the Sleepy Lagoon’;  ‘The Waltz of the Flowers’ by Tchaikovsky; Richardson’s ‘Winds of Kananaskis’; Lowden’s ‘Remembering the Beatles’; Sondheim’s ‘Send in the Clowns’; and then the majestic sweep and glory and thunder of the culminating cannon and fireworks, at about 10.00 p.m. of the 1812, wowed. Virtuosity indeed arises out of the individual, and is given validity in the collective attention to which we give it accord. Seventeen-year old, Jeremy Richardson, honored by the orchestra playing his composition of ‘Winds of Kananakis,’ agreed.

And so too for the specialness of each pin-prick of light wending homewards. In a fairyland of flashlights probing the dark spaces, of small boats and kayaks with Rudolph-like noses plying the dark waters, of lit-up lampposts like isolated molecules in the blanket of the universe, we each are but a bit of light, a sole pin-prick of enlightenment in the dark; would that at once our collective and isolated home-bound fragmentation so readily re-unite in harmony and accord. Sound for sound. Light for light. Now for now. 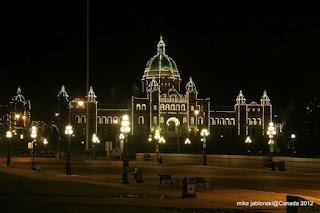 [photo courtesy of Mike Jablonski]
Posted by rfpentelbury at 5:29 PM