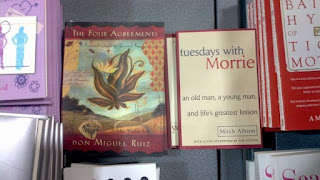 We humans are fundamentally ontological.  We discern meaning from our being. We take chance and circumstance and coincidence and weave and wrap and unravel and postulate, sure that somehow there is meaning in the measure of things.

Hamlet believed the ghost. Hamlet took conscience and made out of consciousness a trap by which to catch a king. Hamlet risked truth for concealment, and in such guise of madness did so o’erthrow his Love that she, being the quintessential Ophelia of classical and o’erwraught disposition, did drown drown drown down by the river. So too for our meanings; we succumb to the truths we give them rather than face them squarely for what they are: circumstance made co-incidental with but a hint of humor
.
Re-visited during my summer break in Victoria by each of the three persons playing ‘Mitch’ to ‘Morrie’ in ‘Tuesdays with Morrie’  (a play by Mitch Albom based on the truth of visiting his old professor now stricken with A.L.S.), I am struck by the coincidence of time, chance and circumstance.  We meet in reverse order of chronology, Perry, Donovan, and Jay Newman. Perry Burton, marvelously adroit as the evil King Claudius in Hamlet, diabolical on the outdoor lawns in the gloriously setting sun amongst the red and gold Arbutus trees on the grounds of Camosun College, wades in amongst the audience at the end of the play and comes directly to me, propped up in my wheelchair, to ascertain my readiness to re-assume the role of Morrie, and to re-assure me of his interest in playing Mitch. Within the week Donovan Deschner, a former student of mine who in the mid 90’s played Juliet’s father Capulet, and then played Mitch to my Morrie in 2009, arrives as a house-guest; life imitating art. But the real con-incidence arises in the same day arrival on Vancouver Island of Jay Neman, who as an actor had previously performed in several shows under my directorship, but first approached me in 2004 with the script of Morrie, and so began the saga of some 35 Tuesdays with Morrie, in many various venues, and subsequently some eight or so shows with Donovan, at the Centre for Performing Arts; life imitating art.

Coincidence? Perry, Donovan, Jay, all within a week. Saw Perry on Friday. Donovan leaves Thursday after lunch; Jay arrives that same Thursday for dinner. What meaning be there in all of this?

The cornflowers by the walkway just after the Selkirk Trestle (dubbed Purgatory Bridge) are in bloom in August. They too are a part of Morrie Schwartz, of Vic Peters, of Hank Gerlhoff. Each, had succumbed to ALS, amneo-trophic lateral sclerosis, Lou Gehrig’s disease, and the ALS symbol of the perseverance of hope and the triumph of care over the inevitability of the disease is worn on the lapel, flutters down down down into the graves. Vic, whom I met soon after I assumed the role of Morrie, became my friend. He was a multitalented man who ran marathons, hiked, played guitar, crocheted rugs, carved wood, made wine, and wrestled with his disease to the end. I loved him. Hank, met through Vic, became my friend too. He was a man taken on a journey by his faith. The voyages of his past are documented in photo after photo that he submitted to Google Earth. The voyage of his future lies in his belief that he will meet his wife in heaven.

We give meaning to life. We watch it unfold and in the crossroads, the interstices, the warp and weave of the straight lines and the clutch on the curves we find significance. Or is it all coincidence? Perry, Donovan, Jay, and their Mitch to my Morrie, all met within a week in August, 2011; what of that? Now, then, now?
Posted by rfpentelbury at 1:22 PM