A Hand for Humor! 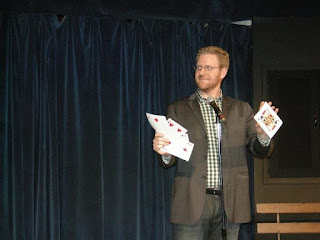 Humor has its drawbacks.  The first comedian presenting at ‘Hecklers’, the basement bar of Victoria’s Radisson Inn would make much of that first line for openers. He persisted in the lewd, crude and the rude. And despite ladies present, his imagery was that of the uninhibited, the exhibitioner, the perverse shocker, the assault on the senses. Yet he had more hands clapping than I could count.  And I realized (ladies and gentlemen), that on this Friday night, well after dark, with drinks, women, men, and the spotlight given to the exposition of comedy, that I was in for a tasseling and titillating test of integration.

Yet the Master of Ceremonies soon enough advanced the action. And while he was speaking it struck me that though genre specific, though differentiated, potentially divisive, dislocating and downright dirty, it is in each and every moment that we are tested for readiness to be aware, absorptive, assimilative, compassionate, and inclusive. What part of Integrative is not? What part of Whole is not? What part of Everything is not? Preference is all. And so prudishness and perversity lie together abed in the sea of allusion, illusion, and inference. We are but mankind adrift; flotsam and jetsam in The Universal Energy.

The hand is a great reference point. The thumb is thick and versatile, a symbol of the sexual/sensual basis of life. The forefinger is the action/adventure; it points and leads and instigates. The middle finger is the romance/sentiment; it clutches and clings and signifies. The ring-finger is the knowledge/esoteric symbol. On my own hand it is longer than my index finger, connoting more thought than action? The little finger is the spiritual/wisdom finger; it has the least leadership of the hand, the last we usually think of. And in the center of the hand are the palm-lines of the smiles and frowns; the downs and ups of our emotions. Great literature is like that; it has all of these elements combined. Shakespeare’s plays find their classical appeal in their ability to reach all levels of the populace; so too for the art of the Mona Lisa; so too for any effort at ontological insight that is not anemic; so too for epistemological attempts at evolving the psyche. Integration, consciously evoked, intellectually apprehended, emotively galvanized, meta-cognitively realized, or not, seeps into the interstices between the myriad fingers fiddle-fuddling amongst the five-finger discounts practiced by misdirected mankind, and raises the bar.

Donovan Deschner did that. He raised the bar. In the guest spot as the visiting comedian he brought the audience to insights of our ego-mania, insights of our being judgmental, insights of own inertia, insights of our attachment, insights of our predilections for positions of power, insights of our inability easily to transcend the paradigm. His was no set based on epistemological anemia, it was an enema designed to purge the up-tight, the morally pretentious, the ontologically challenged. And as his guest, as his former teacher, he even deigned to apologize to ‘Richard’ in the crowd, who presumably would not appreciate his reference to the splurge of spermatozoa pinning down the pin-hole in the date circumscribing one’s conception. No apology needed! Or am I too abstruse? Too obtuse? Ha! Too buttoned up?

We eschew and judge and condemn at our peril. Life is full and resplendent and funny and goes on whether we approve or not. Preference is not meant to be preclusive; it is meant to regulate the amount of times we engage in a specific activity; monitor the choice of purposefully encountering a specific proximity. And laughter, that great gift of real release, is the sound of the soul cracking out of its pent up shell, ready for NOW!
Posted by rfpentelbury at 8:22 PM