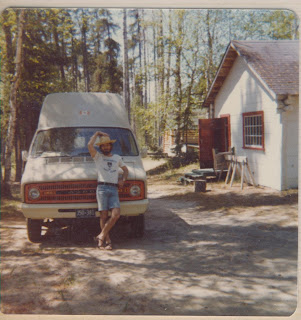 My first vehicle and first spring in Canada, 1976. (A University of Cape Town T-shirt)

Seems guilt is worse than reality. We take ourselves along with our mistakes into the months and even distant years of our future, regretting that the lessons we learned were at the expense of others, and presuming that a person still holds it against us, or at least feels that we still are somewhat unworthy of their affection, consideration, liking. The insecurities can debilitate. What if you, the one who was immature, unthinking, uncaring, wrong, were to run into the person so slighted, betrayed, injured, in the grocery store, the social gathering, the reunion? Or do we just shrug off the past, put it down to immature experience, and trust that the other person also just accepted that we each get bumped along by the progress of life?

There is a certain agony in me for the things I've said and done in the past. It comes up unexpectedly, and rides me awhile, and I churn over the incident and shake my head at myself and click my tongue and offer a prayer that I be forgiven by the person I've wronged, even as far back as forty or more years. Recall happens occasionally when driving, whether behind the wheel of a car or just in my power-chair. Recall happens when something in a movie, some phrase, some vision, some feeling surfaces to remind me that I once said or did something hurtful, selfish, egotistical. It happens not so that I'm depressed or rendered miserable as a general state of being, but rather as checks on my insight, as reference points by which I might not repeat the errors, like lessons needed to learn the map of my own potential. If only others hadn't been hurt!

One such lesson occurred back in early '76. Behind the wheel of my new V8 Dodge caravan, the gravel of the Northern Ontario back-road churning up and spitting rocks beneath the tires of the speeding vehicle, I selfishly showed off some of my driving skills. Two women and a young man roughly my own age were my passengers. No seat belts in the back, those days. The man's wife became progressively uncertain, and eventually over-stressed or emboldened to secure our lives, asked me to slow down. She must have had to repeat herself several times, since the moment that I still regret is when I actually, in my 24 year old arrogance, looked at her and barked, "Shut up. I know what I'm doing!" Virtually immediately, as is my wont, I examined my rude outburst. But too late. Perhaps I even slowed down a smidgen. Perhaps I even sped up a bit. But the damage was done. I do not recall if I apologised. The relationship between the couple and me was forever tainted, I felt. I had not only growled; I might as well have bitten. My apology, now, is very late.

Cannot tell you how many times I have mentally rerun that road. I could almost, some 35 years later, find the precise spot on the slip-sliding surface where I said it. But lest this sound too self-conscious, I mention it as but part of the great meteorological soup of ingredients that are within anyone's makeup. We are the sum of all the parts. I happen simply just to keep agitating at the stuff in my own stew. And each peppercorn can pack a punch, if chewed all by itself. Nor do I hereby suggest that anyone spend one's time invested in the past rather than the present; the point is, when the past surfaces in the present it is worth within that 'now' truthfully to examine that moment of the past, or why did it surface?

So, 35 years later, I happened today to make contact with the lady and her husband in question, and in relating the event received this precise wording: "We chuckled as we can't recall the driving event as u do." Wow! Goes to show; we are own worst enemies, ha! Now, what about...?
Posted by rfpentelbury at 8:25 PM