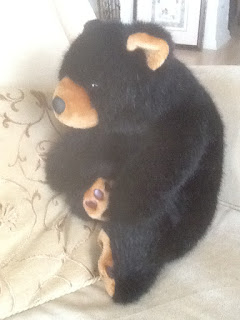 I was not yet old enough, even at 50 something, to react more considerately. When the Christmas gift to me of a stuffed toy black bear from a friend was glanced at with a fair amount of disapproval (or judgement) from the 80 something year old man, three seats away from me, I might have realized I should have curbed my intensity of affection and appreciation. We were some 12 or even 16 people at the present-swapping, all adults, except for the two children, about 6 and 8. And even though the little boy and young girl worked at being our Christmas elves, distributing the colourfully wrapped gifts according to names, they themselves received no presents; their own gift openings had been done on the night before. It put them very much in the role of onlookers. And the young girl's eyes were now glued to my brand new black bear. "It's really a reading-book pillow," I explained, holding it to my chest and miming at flipping over pages.

The old man gestured, "Here, let me see it." I cradled it over to him, and he plucked it from me and promptly pushed it into the little girl's arms. "You have it!," he said to the child, and her eyes went wide. In a moment I have repeated many times over in my mind, where instinct and self-preservation, selfishness and materialism, symbolism and sentiment all coincide in a precise moment that defines your action before you pause to think, I blurted, "No! Sorry, that's my bear. I'll get you another." The room went silent. But  then the giver of the gift and the mother of the child as well as my wife all rose to my defence, and with caring phrases pointed out to the child that she could not have things that were not meant for her. Yes, there were tears. Yes, one of the younger women who had lived in that family house most of her life fetched down her own old teddy bear from the top shelf overlooking the kitchen, and gave it to the girl. And generally the situation was saved, though to this day I wish I had reacted differently.

The thing for me was the history behind the gift. Back in July of 1977, within a year of being in Canada, I'd had to shoot a bear. Me, who always has loved teddy bears, had to shoot a real one. And though I collected teddies, and used them in some musicals I directed (as in Frederick’s, in Pirates of Penzance; and one for Tom, our big lone guard in Iolanthe) I had never come across a black one. But sometime just before Christmas, about six years ago, my wife was pushing me past a stuffed toy display in the mall, and there he was! A black bear! Perhaps I had already told my wife the story of the shooting, or perhaps I relayed it then, but she realized I liked the thing, 50 something though I was. So she told her friend. And her friend went and got it for me for Christmas. And I was touched at the gesture, the thoughtfulness, the... How we do defend ourselves!

Boundaries are healthy. Little girls learn them. Men, it seems, keep having to relearn them. Animals may even learn them too. Many a dog stays in its yard. Socially we extend ourselves but have a 'none of your business' clause. And Santa Clause, though believed to be real by many a child, eventually maintains a boundary of belief in even the sternest of adults; come let us celebrate with presents and egg-nog, but preferably without egg on my face. The generosity of Christmas overwhelms emotions, budgets, and constraints. But for a real black bear, back in '77, as well as for a stuffed-toy, some 30 years later, the boundary had ended with me. By what self-righteousness did I lay claim to being right? Surely there were other ways to discourage the real bear? And surely there were other ways for me to handle that Christmas too? But we balk, at boundaries. 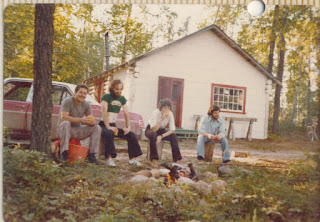 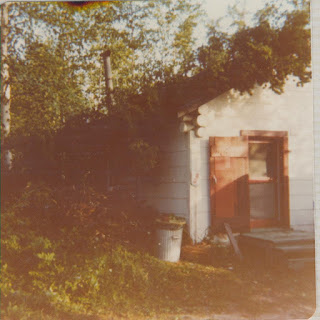 The cabin after the hurricane! 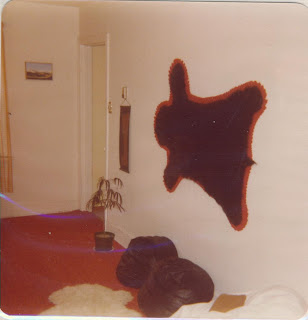