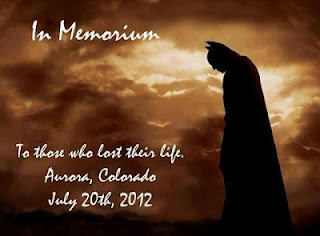 "If a tree falls in the forest", the question goes. And the ego stance of it makes me blink. As if the existence of sound, the existence of a forest at all, is predicated on my witnessing it. Very small children are like that. They lose sense of object existence once the thing is hidden behind the back, and they flick the eyes toward some other distraction. Not seen; does not exist. How very many things there are that we too give no life in our overlooking them? Like hearing about the death of a someone we do not know. Sad we say, but personally we are at large unaffected. It is when we are involved, when we have to dodge the falling tree or be hurt by the loss of a loved one that we are startled into a disintegration of comfort, of complacency, of our quite steadily lived lives.


That I should be in Denver, at the Double-Tree Hotel on Curtis Street, on this same dark night as the massacre of innocent people at the Batman premiere is purely coincidental. The unexpected event has no relationship to me, personally. In fact the awful event took place ten miles from the hotel. And it was only this early morning, when a Facebook post from my friend in Australia commented about it, that I realized that in the night, tossing and turning as I was, that so many trees in the forest of humanity near me had so brutally, callously, unfairly, premeditatedly, yet so randomly been cut down. And because we were not there to hear the thuds, did the event not occur? Are we not to be affected? I do not know any of the victims. Does that lessen grief, shock, involvement?


"Weep not for whom the bells tolls," the poet wrote. "It tolls for thee." Some would have it that the very flap of a butterfly's wings affects the universe. Good or bad, it makes for an interpretative process, defines one's fundamental outlook on life. Existentialists will say it is what it is, that butterfly clap. No relationship to me. Some will imagine it as loudly as the big sound of thunder offsetting a thousand and one reactions. Yet since such a flip-flap is beyond our control, why bother with it all? What matter if we kill a few score of the creatures on the windscreens and car-grills of our hurtling at life? What matter if we harvest trees and animals of all sorts, and carrots and peas too? Where ends the slippery slope of our caring too much lest we tread on an ant? Or kill a person?


Ray Bradbury has it, in his short story called 'The Sound of Thunder', that were but a single butterfly more to have been killed at the time of the dinosaurs our entire present would be different. Different! Depending on one's stance, that of course might mean better, not worse. But there is something in the deliberate intention to kill for the self-gratification of one's ego that sticks in the craw. As adults we teach children to trap the feared bee or the spider in the house in a glass, then to slide the paper carefully under the lip, and to go set the thing free. But we are not so kind to flies, and especially not to mosquitoes. And we watch war. And we continue to cage-fight. And we perpetuate aggression and self-aggrandizement. And we do not hear the shrieks of the fallen beyond our immediate ken. At least, some of us do not. Narcissism is about referencing in terms of the self. The paradox is, a real referencing of everything in terms of the self would be to understand that being one's very best might be directed toward serving the whole. And that when a tree falls, it serves us all, heard or not, whether serving as nature evolves, or whether just as we intend. It's up to us.

Posted by rfpentelbury at 12:40 AM