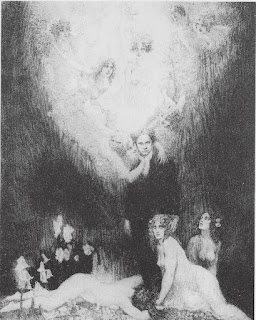 We do not like the subject of dying. A friend told me she had cancer, a long long time ago. She invited me to come sip sherry on her deck. I never went. Another friend told me he was soon to die; I asked him about his symptoms. Angrily, he told me in gross detail. I never visited him either. I was young then, in my late 20's. Already I had seen death, on both sides, in the border war of Rhodesia. I had also encountered death of all sorts as a child of Africa. I was directly responsible for an old servant's death, due to my boyhood selfishness. And then too, not yet a teenager, I was responsible for our dog's death. Death. It hovered in my consciousness as a thing to be feared, a thing to be avoided, guarded against, cautious of, and even hated. Until I grew older. And then one day it all seemed so inevitable, so natural. I wondered why I had not just accepted it as part of what is going to happen to all of us, anyway.

"Every day, have a little bird that sits on your shoulder and asks, is today the day, am I ready? Am I being the person I want to be?" That's what 'Tuesdays with Morrie' is all about. And then there are very many other platitudes we each could bring to the subject, as well as the euphemisms. At issue is the relevance of the immediate. We know we have to die, eventually; it is not the same as being told by some authority, or by one's very disease, that there is only so much time left to live. Well, that's what my friend has very recently told me, and now as his days dwindle down I find myself grieving through the  Khubler-Ross stages: disbelief, anger, bargaining, depression, and acceptance. They come naturally, but not equally. Learning of cancer in a loved one will do that to us.

How to offer anything other than platitudes, especially when far away. I've been at the bedside of some of my dying friends, especially recently. I've heard the last gasp, seen the last flutter of light in the eyes, witnessed the body loose energy. These are very hard experiences to have, especially if one is guilty of the death in some way. My selfish disobedience as a boy, my ineptitude in the army, my.... Easier to accept the death of sick friends, especially if they're significantly older than oneself; they have lived a full life. But my friend who is counting his days, who lives so very far away, happens to have been born in the same year as me. There are too many of my old school friends who have already 'passed on'. At our recent forty-year reunion, sixteen names were read out. Some had been dear to me at one time; all had been dear to others, all the time.

How to reach out across the miles and tell an old friend that you care, that you think of him as constantly as you breathe, yet find yourself almost startled to realize you have happiness and participation in the moment by moment existence of your own life while his is so evidently winding down? Does it suffice to say that you feel regret for his condition, feel loss for his absence, feel concerned that something will be left unsaid, undone, even unfelt? Death is confusing. We can only surmise what it would be like. We cannot empathize with dying itself; we can only empathize with the bereft.

My friend is dying. I write because I cannot reach him, cannot assist him, cannot hug him, cannot get to care for him, cannot give him much more than words. And because this is such a generic essay, rather than specific enough to name actual names, it is about he, she, you, and me. Death. We realize that, uncaring of particulars, an end will eventually reach each and all of us, earthen voyagers; what we do until then... is to live!
Posted by rfpentelbury at 10:09 AM