But for Two Bits! 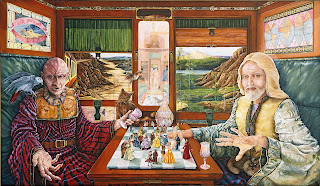 Stories have a beginning, middle, and end. There are neat loops in the structure of life that culminate in an ending sufficient unto the moment. But sometimes, oft times, we begin our stories with no sense of where they're heading, let alone where we're going.

Some twenty plus years ago I was given a soapstone chess set. My Dalmatian puppy took off with one of the pieces, and having devoured it, I presume, came back for yet another. He was half-way through it by the time I found him. And though the misshapen bit was kept on hand as a reminder should the opportunity arise to replace or to have the errant two pieces remade, that set remains to this day, unfulfilled. It had no game played on it, near as I recall. It has not been displayed. And though the soapstone board has featured in one of my large paintings, the pieces, pawn, bishop, rook, king, lie snug in a purple bag packed off in some shoebox. Without the whole, things are incomplete.

In Victoria, yesterday, near the corner of Johnston and Douglas, there was a chess set in the store window that we passed on another quest. And we did not stop and we did not ascertain its value, hurried as we were. I noticed only that its various pieces were in an Arthurian motive, I thought, made perhaps of pewter, and that they squared off on a raised board, inlaid with brass and copper. Quite striking. Each piece stood about the size of the length of one's thumb. And as is my wont, I conceived of owning it, of havIng such a nice set for the den-table, now that I do not have a dog to go running off with odd pieces. Besides, the set was second hand, since the store was one of those Antique Sales type deals, and I expected to get a reasonable price. Besides, yet again, it's my birthday in two months, and since my wife was walking beside me I hinted, "Nice chess set in that window we just passed. Would like to see how much it is!" But we were rushed; my power-chair was in top gear as we zoomed along. My wife walks fast!

Today I was driving the car. I had some extra time since my friend asked to be picked up at 2:00 p.m., and I already had made two stops. One to drop my wife off at her office, the other to get gas since it too had dropped to $1:22. Now, with a full tank and some twenty minutes to spare, I decided to drive the few blocks to go see just how much that chess-board might 'set me back', as the saying goes. But stopping at that store proved difficult. There was a long red line for the bus zone right in front, and the only parking had a red Honda Civic taking up the space. So I circled the block, but the Civic was still there, and any other likely space further along was far too far for me to walk, since I can only manage about two minutes, unassisted. But then I noticed there were some spaces on the opposite side of the street, and naturally I wondered if perhaps there was one directly across from the store. I check my mirrors and pull a magnificent, silent, quick, smooth, U turn. Right into the face of oncoming traffic! So I speedily U turn again. Thank life for handing me no traffic ticket! Thank life for keeping others safe! And carefully, I go for yet the second time around the block. But that Civic remains. So I pull up illegally beside the red line, stop right by the store window, and leave my car running as I hobble quick as I can around it and then peer at the set in the window. There is a sign! The life-like figures look great. The Knights are horsed! (I do not even have time to register that all the pieces are actually Roman). And the sign says: "Two pieces missing!"
Two pieces missing. Now what's the parable to be made of that? 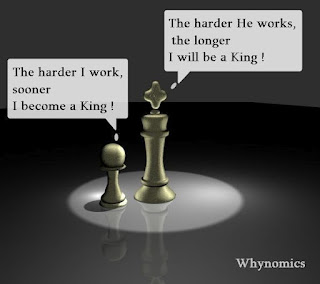 Posted by rfpentelbury at 5:54 PM