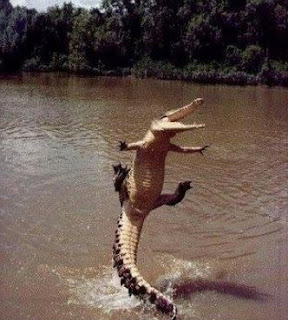 Given this picture [by whom, please?], it made me think of this chapter from my novel:

Early one morning, with me on one side and Aikimbo on the other, nine or more excited kids from the servants’ kraal team up. “You can call me Boet,” I invite. “Just don’t let the Bwana or Madam ever hear you!”
“Hau! Boo-et!” Aikimbo teases. “No more Bwana Adam-Boet. But just Boo-et?”
“Eyah!” I affirm, despite the hint of condescension in his tones.
“Boo-et! Boo-et!” The kids mimic, taking a perverse delight in it. After all, Boet, an Afrikaans nickname, really means ‘Brother’. Even when alone with them I was called Kleinbaas, Small Boss, or Inkosana, Young Boss, or sometimes, if I deserved it, most respectfully, Bietjani Zimba, the Little Lion.
With little two year-old Tobi up a two-foot ledge of the river bank, safely out of range, we begin the war. Taking sides along the soggy water’s edge, with Aikimbo up in the tree as first guard against the crocs, we pluck clay-clods in gooey fingers-full up from the mud, and plonk them like marshmallows on the ends of our supple wattle sticks, then gleefully whip the missiles at each other. We do not think of other dangers besides crocodiles. It’s just a game.
While the others mercilessly pelt each other I bend for more mud. A viciously heavy clod lands with a furious wet splat between my shoulderblades. I look up to see a grinning Aikimbo, makeshift spear in one hand, wattle-stick in the other, reload.
“Boe-oot!” he jeers.
My anger bursts. “Ienie lo n’daba ka whena? What do you think you’re doing? Whena lo ‘Lookout’! You’re the lookout. Blala lappa lo post!”
“You stay for to be at the post!” he shouts back. “Here, you’re not for to be my Boss, Baasie Boet! So, Boet, you go for to be up there! Or go for to be going back to the for where you to be coming from!”
The other piccaninnies advance uncertainly, aghast. No black, not even their parents ever defied a white person, not one! But perhaps, what with the new ‘’ the Bantu are speaking of, Aikimbo knows better? Older than them, older than me even, he did spend his time nowadays visiting at the freedom talks of the Compound. Unlike them, he didn’t care if M`dhalha had told them that they should stay away from there. Now here is a thing to see! Yebo! There is something very strong about this new Aikimbo as he faces their smaller white master. But, they also see, even so, Aikimbo is trembling.
His spear jabs down and sticks up in the mud in front of me. A wrestling match? I’m astounded. Never has any black person ever shown me open defiance. I advance on him, my finger pointing at the tree. “Get back to your...!”
And the crocodile launches. It bursts out of the froth of the shallows like an angry dragon snapping its way up from a boiling cauldron. Silvered spray showers off its dark scales, and jaws agape, whipping its broad tail in the deep mud of the lower bank, it begins to churn its thick short legs toward us.
Screaming, we boys scatter. Aikimbo, leaving his spear still stuck in the ground, hurtles off, overtaking the others.
I spin to check the croc’s progress, and then whoop with delight. The beast is stuck! The clay is too deep for it. Then my breath holds. “Tobi!” I shout, and at once run for the two-year-old, yanking up Aikimbo’s sharpened rod of mopani limb as I go, but the spear feels useless; its weight won’t penetrate or even waylay the crocodile.
Tobi turns to see the strange creature. Its great tail lashing, it slowly advances. He totters to his little bowed legs, and then just stands there, cheerfully giggling. And then, to my horror, he takes a stumbling step forward, and falls off the embankment, barely ten feet in front of it.
Both crocodile and I lunge forward.
But the crocodile, gaping wider and wider, is slowed by the seeped clay. Just in time, I yank Tobi up. The croc’s teeth clack to a close. Gobs of the ugly thing’s drool spray my leg. But as I retreat I’m hampered by the bank behind me. Then the beast’s short hind legs jerk free and, grunting open-mouthed, it claws straight at us. Within inches of sure death, and now with the kid’s struggles weighing me down, I know that I cannot escape. So I raise the toy spear, fragile as a toothpick, and catapult it right into the crocodile’s wide-open throat.
Taken aback, the creature seems to gag as the rod’s sharp wooden point drives deep. It flings its head about, rears on its fat hind legs, and emitting grunts of pain and frustration, flails its thick armor plated tail and scrapes at the earth with its snout until the spear, protruding like the shaft of a lance, snaps. Then the beast spins, propels itself back into the mud, and begins churning back toward the river.
I look about. “Aikimbo!” I shout for him, hoping to gain his favor. “Where are you? Upi whena? Here’s your brother. Here’s Tobi! He’s safe!”
But Aikimbo is nowhere to be seen.
[For a link to the novel at Amazon.com please see: www.RichardMichellePentelbury.com ] 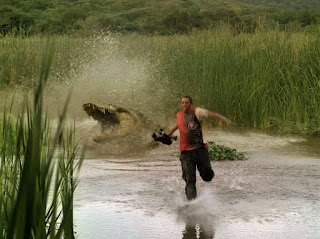 Posted by rfpentelbury at 2:29 PM