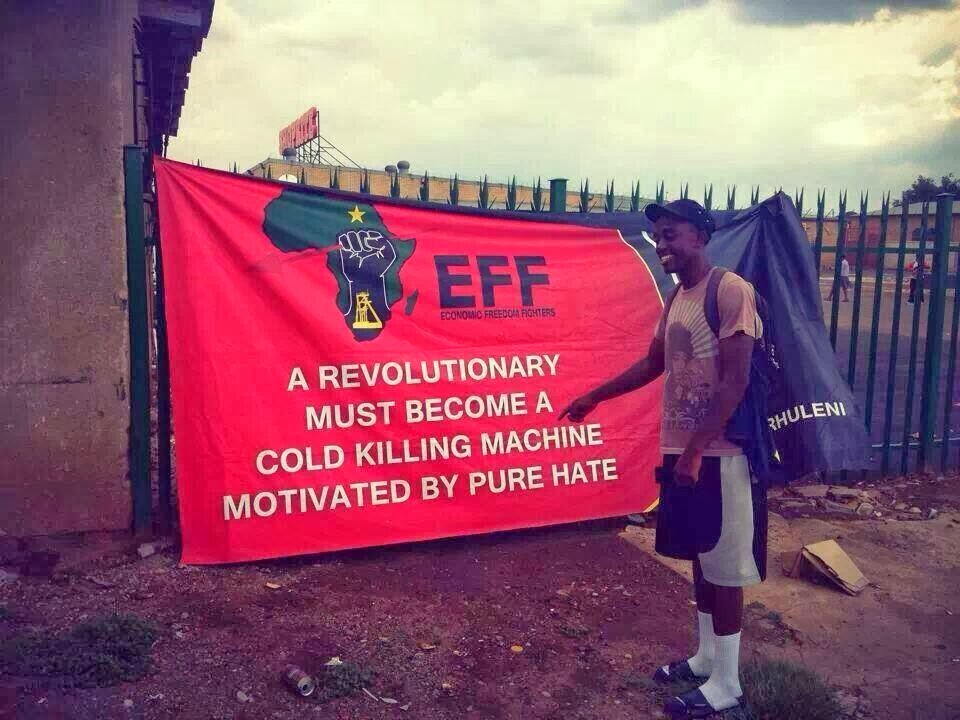 "Sticks and stones may break my bones, words can never harm me," went the childhood saying. And yet the very things that have harmed me most are words. Once a girl calls you ugly you do not forget. Words like stupid, stinker, monkey, thief, or bastard can stick. Some words can be altered with time. Ignorance can be addressed. Laziness can be corrected. Cruelty can convert toward compassion. Selfishness can redirect toward altruism. But it is those words of others that propel us toward action, toward world views, toward adherence to ineluctably inculcated values that might give one more than a pause to examine. That someone not only came up with that slogan as seen in the photograph above, but then have gotten it materialized into such a blatant banner that it so evidently be bruited about not only to locals, but thereafter to reach the world's social network is fodder, indeed, for redress. Or what's a revolution for?

Juxtaposed to that photo of the Economic Freedom Fighters' slogan is the purported quote from Terence McKenna, as seen below. The implication in his words is that we who do consume, who are relatively free to spend economically, are "morons" for being the obliging victims of cultural engineering. The objective is to be free. The intention is to stop the manufacture of goods from our dying resources. The purpose is the reclamation of one's mind in order to think for oneself. But the collective goal is clearly not that we, "...must become a cold killing machine motivated by pure hate."

When I was a conscript in South Africa's 10AA Regiment during the early 1970's there were many moments I experienced of pure hate. It had to do with the complete self-righteousness I felt as a result of my training, of what I'd experienced, and what I'd come to see as the only solution to overcoming an 'other's' hatred. It was not dispassion. It was not indifference. It was neither pragmatic nor academic; my core was motivated in those moments by the passions of pure hatred. That is, until I came to realize that my problem was that I blanketed an entire and undifferentiated group with my need for vengeance, rather than my retaliating at an individual. And even then, as I matured, I saw that being like an other hate-filled individual, so wrapped up in a wish to kill, was to impair any sense of potential for a revolution at all. Revolution, for me, became synonymous with evolution. One must achieve something better, more elevated, more compassionate, inclusive, assimilative, and integrative. And though the process by which I came to crack from my belief that I was invulnerable to the impairment of my own contentions remains secreted away in my consciousness, I am convinced that each and all of us, given sufficient time and influence, might change for the better too. Or does a leopard never change its spots?

Nurture versus nature has long been a debate. Cowboy movies have made it so very clear: After the bad guy is dead everybody lives happily ever after. But our modern world (along with Clint Eastwood) introduced Unforgiven, as well as Bill Clinton, and we no longer are quite so sure who the good and the bad guy is. Integration would have it that the man who stands so smiling at that banner of hate (as above) might easily be nurtured from participation. Surely even a revolution built upon such hate-filled precepts as that slogan is designed eventually to bring about a society that will be free from tyranny and oppression? Surely the collective objective is that we all might coexist in a state of harmony and accord. At least, eventually. You think?

But juxtapositions continue to fragment and divide. However subtle. Real revolution, I submit, takes place not so much by the sticks and stones imposed from without, but from that which is made to churn in one's mind, good or bad. Cautious then, words by which we ignite potential. 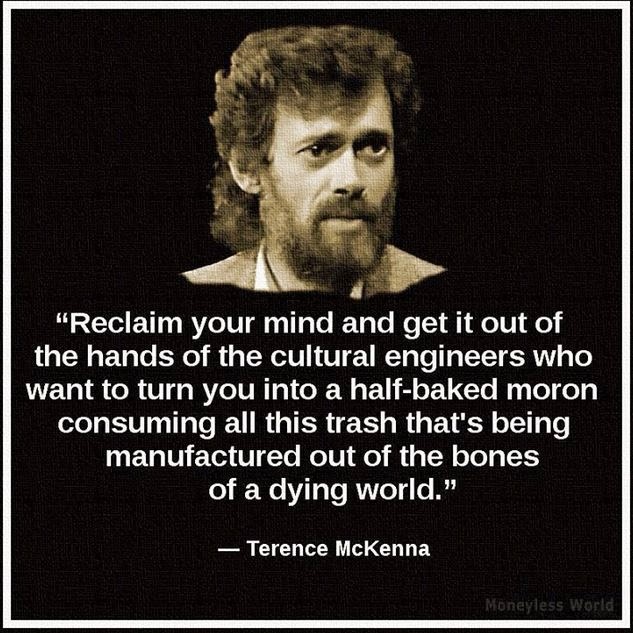 Posted by rfpentelbury at 11:45 AM