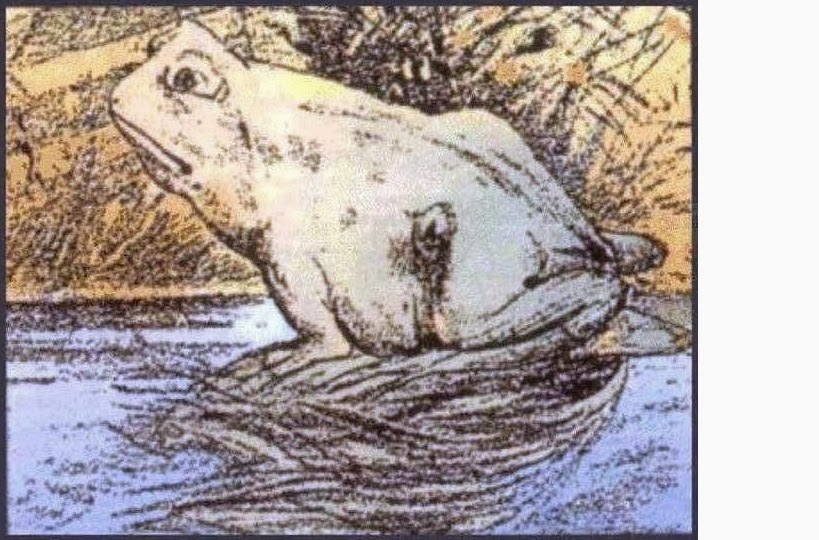 (This anonymous image, found on Facebook, I hereby name: A Tadpole's Potential?)

Three wise old bullfrogs brought their gifts. They came from different and far away countries, across the great twin ponds, and they bestowed on the tadpole the priceless treasures of Gold, Frankincense, and Myrrh. The tadpole was too young to understand what these words might mean, let alone the potential inherent in the five years worth of gifts. Together, it was like giving him his future, as seen in the picture above, in which, for lack of insight, and for lack of annual examination, and for lack of trying alternatives, all he saw was the reflection he expected. For the next four years the tadpole, although he had the ability of their language, and was provided with the means of instant correspondence, took no initiative to show connection. The few phrases elicited from him came only after coercion from without; overseers had to bully him to write. Eventually the wise old frogs stopped communicating. They kept up their gift-giving, each year sending yet another parcel of the three precious potentials. For them, a commitment had been made. But they were decidedly disappointed that the Gold, the Frankincense, and the Myrrh went essentially unexplored. It was like giving special lures and hooks and bait with which the tadpole might feed himself royally, only to find the potential unused. The gifts may as well have been peanuts, popcorn, and bubblegum. And eventually? Well, at the very least, they knew the tadpole had survived what otherwise might have been the great drought from any kind of sustenance at all. Yet the expected results were so comparatively unfruitful that the old bullfrogs wondered if they should bother to revisit the pond again. After all, a more responsive tadpole might have learned to leap yet further, become transmogrified. But altruism, in the meantime, held sway.

Without a verb a sentence has no soul. The Subject is given meaning. Each thing is given more significance, more potential, when we invest it with action. The rock bakes. It crumbles. It broods. It supports. It acts as a building block, a foundation, a heat-stone, a pumice stone, a lode stone, a pendant, a pebble in the sling of time, a symbol of friendship passed between two. Even left entirely to its own devices it occupies a space in this universe around which other matters flow. The value of something is proportional to that which views, encounters, or uses it. The ant finds the rock to be a mountain. The elephant finds it barely perceptible. The geologist finds it to be a glittering jewel. But people, when we adjudge them to be non-productive, are deemed to be wasting potential. The verbs by which they move are not particularly invigorating.

Love is action, declares a wise friend. Feeling is all, declares a renowned poet. Yet unless there is reciprocity of action we often feel that love is one-sided; is unfruitful; is given to an unworthy; is unappreciated. Thing is, so much of giving is like sowing seeds; the action is that of giving toward a future beyond one's control. Our intentions may produce fields of sunflowers, but a hurricane can wipe all out, except for the unnoticed seed that, small and unappreciated amongst the rocks, is left to struggle toward the light. And from it, and from the genes in its very struggle, may yet grow the future of more sunflowers with yet stronger stems. So, as altruism has it, sew!

Contributing toward life is an action not necessarily always seen. Many models of hierarchies reveal persons who give of themselves without expectations of acknowledgement. They exercise altruism at its finest. That is not what Bucephalus or Flicka or Silver or the golden Trigger had in mind when plunging into danger; theirs was an action of reciprocation. It is persons who give anonymously, who clean up messes without anyone to see them, who return stranded starfish from among hundreds back into the ocean, who make a difference. Not everything need be useful. Not everything must change. Even wild horses do not necessarily have to serve. But metamorphosis is inherent to some species. Evolution depends on it. And yes, we have potential!

Like the magic in the picture above. (Kindly respond with "Got it!" should you divine its gift.) It's not that we do not wish to give it away; it is that we know that treasuring life is both a subject, and a verb. 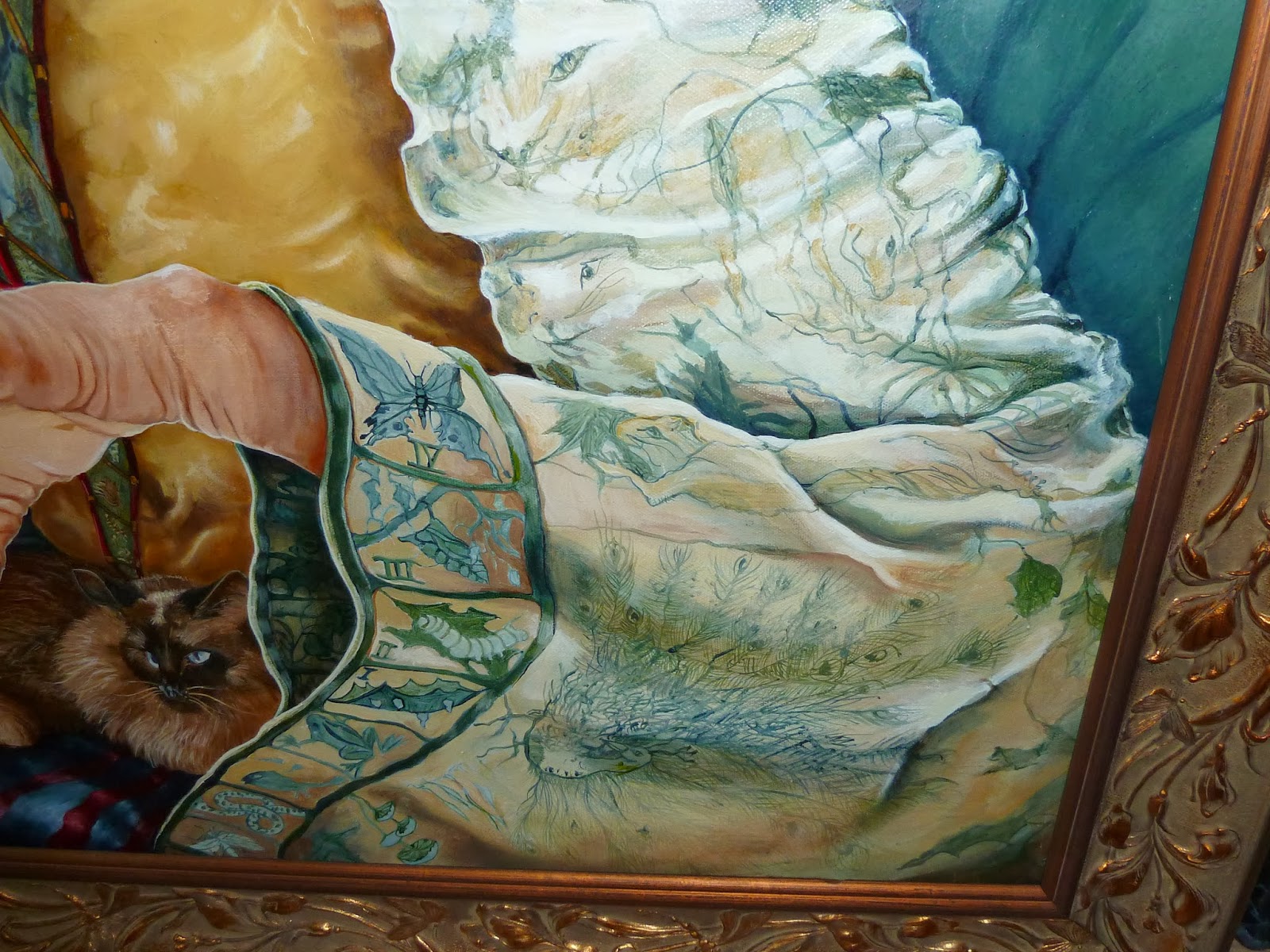 (Detail of sleeve in my painting, Passing Through Too)

Posted by rfpentelbury at 10:21 AM