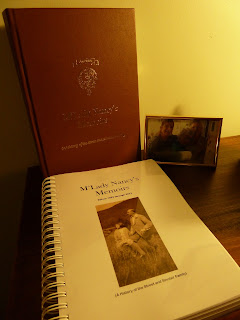 The sandwiches were delicious. So was the cake. And one of the gifts, especially, was a real surprise, caringly selected and carefully kept until the day of M’Lady’s 91st birthday. Given to her by her 27 year old grandson, it was an authentic Sinclair crest silver brooch, found on his recent trip in a Tartan Store in Edinburgh.  Nancy wore it with pride throughout the day. Gratitude for each gift, and toward each of some 28 persons for coming to her party, was abundant. And she circulated as best she could, ensuring that each felt acknowledged, especially the children. The food and the cake had been supplied by her two daughters and two sons in law (each now in their 60’s.) The drinks had been supplied by herself. There were actually twelve bottles of champagne. Perhaps one or two are left?

And keeping track of who gave what, for Nancy, was important. I observed her going and jotting things down on the notepad she keeps at the edge of her desk. Each box of chocolates, each curio, each flower arrangement, and each card shall be acknowledged in the mail. And though Nancy is now email literate, her acknowledgements will come by way of a post-box letter. It is her way.

“I’ve never been to a book launch before,” Nancy began her speech, as she hefted one of the leather bound tomes, “and so I thought perhaps we should step across the way and launch this thing in the bilabong!!” (Nancy has a delightful habit of using exclamation marks in her writing, sometimes as many as four!!!!) Then she explained that the idea for her Memoirs began almost 20 years ago, soon after she met me on Denman Island, Canada. I’d just completed my first novel and was interested in her war-stories and so our correspondence stayed committed and full. But I’d not had the time to devote to her book, given the distance between us and the theatre and teaching that I was always doing. And then, in 2008 her neighbour, Christine Hogan, suggested Nancy do an interview with her on tape. Over several months Nancy did the five tapes, but that only took her up to page 75, the end of the war, and the beginning of her marriage. “Richard took the tapes to type-up after his two day visit here last June,” Nancy said, “But who would’ve thought that over 350 pages were still to come? And those added pages were all accomplished in just the last seven weeks!!!” Yes, Nancy handwrote, I typed, and we found over 2,000 photos and documents to support the text. A publisher was secured, a ten day turn around (including the leather books) promised (since Nancy’s birthday was on the Easter weekend Monday they had to be ready by Thursday!!) and viola! “And so these two special leather ones are for each of my two very special daughters, Linda and Fiona,” Nancy explained, “and the rest are for each of you, my family and close friends, that you may know your history, your lineage, and respect where you came from, be proud of who you are, and preserve the traditions of hard work, taking care of yourself, and giving love to others.” And with that she began handing out the books; hefting heavy one after heavy one.

“It will become my Family Bible,” said one of her grandsons. The comment was genuine, a true gift of itself. A guest, unrelated to the family, looked up at me and said, “What a lot of exclamation points!”

450 pages, each a unique layout, and over 90 years of a fascinating life, and the nits will yet pick, ha!!!
Posted by rfpentelbury at 4:14 PM