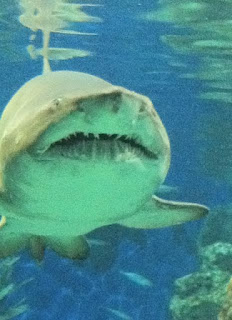 The shark, its teeth as menacing as white hot spear tips, floated among the children. Some screamed in fear. One little girl was actually crying. Many of the older kids just laughed, tried to poke at it, enjoyed the Canadian fun. It was just a video, but I shivered.

Boxing Day in East London, South Africa, is a go-to-the beach affair. One takes a picnic and an umbrella, sun-tan lotion and bathing suits. The summer solstice just five days afore heats things to their zenith, and the sea gleams and the waves come crashing in and the froth bubbles and scurries its way up the sand. Children squeal with apparent delight in the sea-saltiness. Teenagers play beach ball and frisbee. Adults read, sleep, eat, slather lotions on and the air is scented with tropical oils and laden with the sounds only humans make.

In the sea the shark was unseen, or surely people would have screamed. In the sea the shark was silent, or surely my sixteen year old brother, Mark, might have shouted enough to be heard. And in the tumult of Boxing Day bathers and the beach-game players his disappearance went unnoticed. Father and Stepmother were there. When they looked for him, called for him, began their walks up and down the beach, asked questions of others, made phone calls, even contacted the police Mark was nowhere to be found. Only, some hours later, some parts of the boy, chewed off, washed ashore. That this all should have taken place in a matter of hours, and that I only write about it now, nearly thirty years later, somewhat goes to show just how long a shiver can be. (Even my sister in law, Brenda, brother Peter's wife, writes just now, May 2012, to say they were there!)

But the hydrogen-filled radio-ballon sharks that floated in the video, as well as those that I was asked to assist in assembling from the two kits purchased for our Christmas festivities, were harmless. Silent, despite the mechanized ballast that moved the huge five-foot-long life-like-looking menace though the air, the sharks hovered upstairs in the bedrooms until the propitious moment. Once all seventeen people's presents had been opened, the great blundering things were suddenly amongst us: Surprise!

It struck me that my story needed no telling; it would perhaps cause our hostess to feel sorry for me, to be embarrassed, or would unnecessarily draw focus away from her intention that we have fun. And how many other triggers are there not always for all of us? A friend's wife died two days before this Christmas. Another friend gave up smoking, yet there were cigar-smokers on the deck. Another had given up alcohol, yet there was wine and drinks and bottles of booze. One person, often catching my eye, hoping to give no offense, quietly but certainly did not sing carols; her atheism not yet uncurbed sufficiently to be completely integrative. Another person, their pet having recently died, was rather gloomy in the presence of the two dogs. Who else was hurting, was reliving some baggage, some memory, some secret in the closet? How can one be expected never again to hear a gun-shot on the TV, see army fatigues, hear of some seedy uncle fiddling with children? Sharks swim around us in many guises; it is our ability to be larger than the present or the past, to take care of ourselves that matters in the moment, even though there be lifeguards and psychologists and loving others. And sometimes, it is but a shiver that forewarns us; we guard against being harmed, or doing harm in turn. 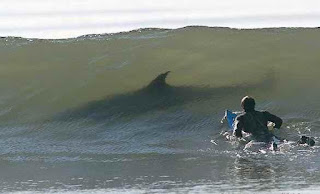 [photo via Al Nickle]
Posted by rfpentelbury at 9:52 AM