A Sense of Life! 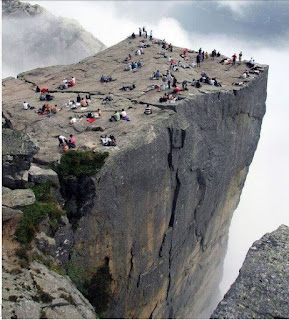 My friend struggles to articulate it. He sips at his 'Habit Cafe' coffee in our hometown of Victoria, B.C. His brother in England is really living! He has a life! That's what my friend envies, that's what so few of us have, he says. And it's not about what he does or who he is, but what his life is about, and when you see it you know it, my friend concludes. (I want to ask him if he sees it in me, but my ego is not ready for him to say no.)

I keep giving thought to my friend's meaning. A week or so later I see him at Habit again and still the answer remains the same. It's complicated. It's a quality of engaging life that you seldom see, that is missing in most, that one ought to lead. And again I cannot ask if he sees it in me. I wonder, why should I be so bothered by another's approbation? Surely what I think of myself is more important than that which another thinks of me?

My own brother still in South Africa, Peter, younger than me, often used the phrase: A sense of life. He determined an other's worth by it. He predicated the phrase on a person's passion for life, their interest in things, in others, in knowledge, in gaining, acquiring, collecting, doing, contributing, and being aware of the potential within. Were he to see this paragraph he may well add more precisely to what he means by his use of 'a sense of life,' but my understanding of his meaning is what I've gone by.

So too for each of us. We go by our own understanding of what it means to have a sense of life. We seldom necessarily need care what another's is, until their own sense intrudes on our own sense, and then the conflict begins. Problem is, we don't really know our own, don't really articulate it, own it, appreciate it, perhaps, until threatened.

So the challenge arises in me. How do I own my own sense of life? How do I take each moment and accept or invigorate it, invest it with intent, mindfulness, meaning, grace, dignity, value, worthiness? Is there any one thing we do, any moment that we are, that we exist, that does not deserve such a sense of being in communion with a greater whole, a greater sense of conspiring with the universe? (If conspiring be understood as 'breathing along with,' the which I learned from the song: "...by the fire, we'll conspire.") Well? The depth of that which we are is seldom tapped. Perhaps my friend intimates as much subliminally; I have to own up to my own sense of life. At what levels am I simply cruising with that which I am, undeveloped, unfulfilled, unquestioned, unleavened?

There arises in me a greater compassion for those similarly stricken; we are the afflicted. Lest we are self-aware we are ineluctable victims of our self-centric base needs, our familial upbringing, our ego-centric self-fulfillment, our societal structures, our ego-ic need for control of others, our pretence at egalitarianism, and at last our wrangling through the disproportionate unfairness within the whole of realizing our own enlightenment at being an essentially Integrative Being in the first instance. A sense of life? I would submit that it arises in the very sense of being responsible for each breath we take, rather than letting breathing itself simply stay automatic. In this living metaphor, thanks to suffocating a little, and then getting some air, there is indeed gratitude for a sense of life! Thank air! Thank breathing! Thank God! Ha!
Posted by rfpentelbury at 8:56 AM