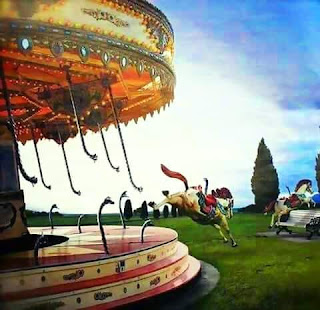 Milton Carman let go of the carousel. He’d lived 91 years. Round and round the cycles of his lifetimes he’d gone, but just before his birthday, February 14th, 2020, he set off into the great unknown. “Happily.” At least, that’s what I inferred by the gleam in his eye when he told me he was “looking forward to the inevitability of the journey.”  Reincarnation, for him, was a foregone conclusion. It was a visceral entity, an inherent belief.

We’d known each other but a scarce seven months, before this last January 27th, and yet his vitality still resonates. It was the energy of a deeply profound man, an ordained monk, a Buddhist teacher, writer, composer, husband, father and grandfather. In short, he was a man who’d lived a full, long, life. And he seemed (as Morrie Schwartz in ‘Tuesdays With Morrie’ would put it) a man “at peace with himself.” Morrie’s lines also advise: “Do what the Buddhists do. Every day, have a little bird that sits on your shoulder, that asks, ‘Is today the day? Am I ready? Am I being the person I want to be?'” Indeed, Milton Carman appeared always to be the person he wanted to be.

“Are you the artist?” he asked, back in June. We were at The Broken Paddle Café. My thirteen paintings had been up on the walls for the month. He appeared an older man than me, but I would not have put him in his late 80’s. His interest in my work, his care to continue the conversation, and his invitation to visit him, and to meet Carol, his wife, was deeply appreciated. By email, Friday, June 14th, he wrote: “My dear Richard, I immensely enjoyed our time together.  It is rare indeed during these turbulent times to come upon another soul who speaks the language with the lilting cadence, precision and metaphorical whimsy that excites another’s curiosity and imagination.   It was lovely indeed being with you. The book about dying that I mentioned is titled, Preparing to Die by Andrew Holecek.  ‘Tis a life-changer.” Yes, from the very outset, Milton was prepared to talk about death.


A sense of friendship formed quickly. A tea at his house, then a dinner with others of his friends, “at a date for the assignation which suits us all.” And at each meeting Milton was content not only to listen, to ask questions, but equally to expound about his abiding interest in the Anima and the Animus*, and its essential interconnection. It formed the foundation of the novel he was writing. (It is a novel, at this writing, that is “sadly a few pages” unfinished.) The cycles of re-incarnations fascinated his imagination, became a belief so endemic to his apperception of life that he was convinced he would “experience life again shortly after regaining entry into the hereafter.” Milton, captivated by the philosophy of Hermann Hesse, also wrote, “I would truly appreciate receiving your extra copy of Demian, which I’ve never managed to catch up with.”


Thing is, the man was still wanting to add to his book collection, wanting to read yet more, wanting still to take an interest in others around him, willing to add to his burgeoning set of acquaintances and friends even at his very late stage and age of life. Thing is, we each are affected by the memory and awareness of others, throughout history. And the thing is, we each, individually, are made more fortunate by the touchstones and special persons that are revealed to us in the passage of our own lives. Thing is, as Milton would have it, each person is special, all in and by themselves.

He signed his emails: “Be well and happy.” At question, one might aver, is just 'how happily we are being the person we want to be.' For me, he was an exemplar. Be well. Stay well. Be happy.

The anima and animus are described in Carl Jung's school of analytical psychology as part of his theory of the collective unconscious. Jung described the animus as the unconscious masculine side of a woman, and the anima as the unconscious feminine side of a man, each transcending the personal psyche. Jung's theory states that the anima and animus are the two primary anthropomorphic archetypes of the unconscious mind, as opposed to the theriomorphic and inferior function of the shadow archetypes. He believed they are the abstract symbol sets that formulate the archetype of the Self.

Posted by rfpentelbury at 12:23 PM