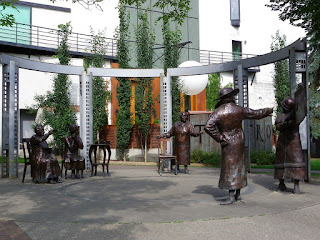 Nellie McLung's great-granddaughter sat in the aircraft seat beside me as we waited for takeoff from Vancouver Island's main airport. I did not know her, then. Around my age, she wedged down in row 6B. A young man eventually arrived from amidst the turgid stream of boarders, plonked down beside her, his earphones in. The woman looked over at my script. "You're reading a play?" she asked, pleasantly. "Tuesdays with Morrie," I replied. "Loved the book," she said. "Yes," I said, and I got on with visualizing my lines. Possibly because of the slight weaving of my hand as I internalized a monologue, she offered: "You're learning lines! You've got to be Morrie!" I smiled and looked out my window as the plane began hurtling down the Victoria airport runway, then responded, "Canmore production. Mid-month. I'm off to meet my fellow actor for the first time. Rob Murray. We have a week to rehearse." She seemed surprised. "A week! Well then, let me help you! I'll play Mitch Albom." Whereupon she took the script from me, and we began my recital; she reading. All the 90 minutes to Calgary we flew over mountains and lakes and wondrous scenery; I spoke into the window pane; she had her eyes glued to the script. And she was good! Her being 'Mitch' was fluent. And just before we landed, we finished!


And so, naturally, we fell to introducing ourselves. "Rosemary," she said. Only later did she make reference to Nellie McLung.  Now, I knew of The Valiant Five*, as far as Canadian History is concerned, and I knew there is a school named after her, in Calgary, and that she configures in the downtown statue of those five radical women, of that time. But to confess, I was not clear, then, as to when 'that time' really was. Rosemary took my card. "This is going to make for an interesting entry into my journal tonight," she declared. And with our landing, she was gone.


"The Nellie McLung school is just across the road from here," Jessie Peters informed, gesturing from her armchair, two weeks later. The wife of Vic (whose horrid disease of ALS over two plus years, back in 06/07 had taught me how physically to portray 'Morrie',) Jessie had yet again driven the 80km from Calgary to see my performance. This time she’d brought Vic's brother, Bill and his wife, Lorna. Last year, when I'd performed the play in Victoria (with Perry Burton as ‘Mitch’,) Jessie had flown out to see it with her daughter, Sharon. Their bravery in facing death, and in encountering ALS head on, has been for me such a model of endurance and love and care. Yet like the mouse in the closet in the middle of the night with the hosts where Jessie and Vic once visited deciding to empty all the closet-contents in order to find that mouse, “right there and then, in the middle of the night,” one can allow for the brain's inevitable ramble and chatter and distraction of what's the matter and where exactly are my thoughts now leading?


Distraction! That's what happened, opening night. I fell in front of the audience! For the first time in over ten years of performing the play, in the fifth act, instead of tipping my wheelchair forward, it lurched sideways and slid out from my behind, and whump!, I landed with several jolts of pain immediately coursing through me. 'What's my next line?' my brain chattered. "Mitch," I called, rather desperately. Thing is, Mitch was supposed to be nattering away, distracted. (‘Morrie slumps over’ was a move designed by the playwright, Mitch Albom.)  Eventually, Mitch (the empathetically gifted actor, Rob Murray) did save me, and hauled my supposedly limp body back up onto my chair, and then, when my limp arms and feet had all been replaced in proper position, he at last says, "what happened?" I pause, breathe, and announce, "I was playing hockey!" And the audience laughs. Always. Their relief for Morrie is palpable. They did not know that right then, given my lack of fluid between my vertebrae, I was in quite a crucial state of discombobulation. My brain raced through alternative scenarios; paralysis was a real fear. And the instant chatter of ‘what's the matter and what's the next right thing to do’ coursed through me like a squeaking mouse, scurrying in the corridors of my mind. But I persevered, and the audience, none the wiser, thought it all part of the act. Yet the fifth act was only half way, there were five more acts to go!


The decades we have mount up quickly. All the while we struggle to be at peace with ourselves. We try to be fully human, but our concentration is indeed confounded by the distractions and insecurities and particularities of circumstance and advent. And so we scramble at times for the next right thing to do. Often, someone is watching us. Yet inside ourselves, we are mostly alone, the captain of our thoughts. Marshalling our reserves, counting on experience, and directing our responses becomes the very art of living. Or does one simply withdraw from life and shrivel into old age, sans teeth, sans eyes, sans ears, sans everything? Ah, the plays (with life) are the very thing by which we may capture the real essence of living! To contribute to the health of the whole; or what is one here for? Such are the marvelous moments among men and women, and the course of our thinking and feelings too. Connected as we are. Bring on The Singularity! Or does my brain now chatter with "what's the matter with that," or even this? Anon! "Next?" 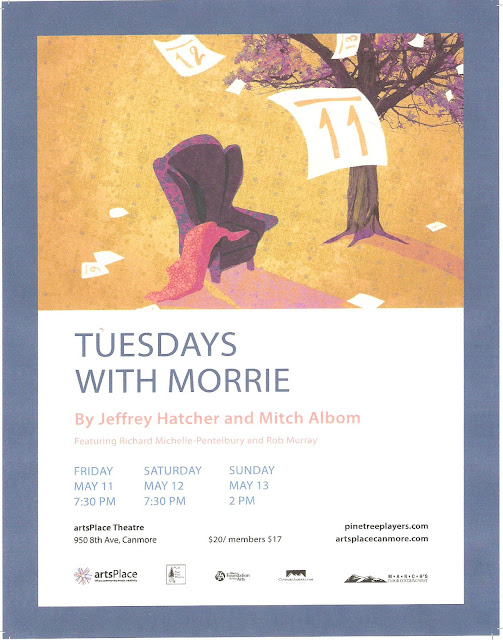 Posted by rfpentelbury at 2:37 PM