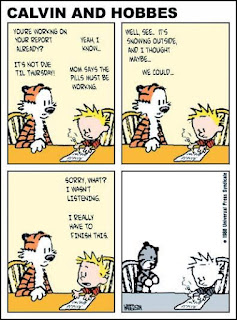 Why do we feel for what otherwise is foolish? Men and women in costumes, wearing makeup, and singing their songs in heightened states of fancifulness reach into us from across the stage, or the screen, and pluck at our hearts. We need reality to breathe; we need fantasy to create. And in both we evolve. Or do all our instincts arise out of a need for survival? Suspended disbelief has us glued to the TV, to the stage performance, to the musical we've heard before, and we will talk about made-up lines and fabricated lives as though they were real. Very real. Like the shadows in Plato's cave that we watch dance against the wall; we give credence and veracity and vitality to their existence, and are tugged by our identifying. How else to look for Nimo? What else but throw a Hogwarts party? Why else attend South Pacific and feel it resonate? Make-believe! Yet I cried at Mike Johnson's raw soul-filled pain in South Pacific, on Saturday night (even though I too played that same part of Emile de Becque, twelve years ago.)

To construe, to imagine, to lie through the teeth, to create; these are the verbs by which we move mankind. Nouns by themselves have no life. They need a soul; they need a verb to live! Like formal sentences. A formal sentence can only be attended by a subject and its predicate. Boring! (Ah, but don't adjectives and adverbs really enliven life?) Yet it is not the nuts and bolts that really gets us, here; it is the feeling we feel when we give attention to that which, when made by man, is really not real. Images, artifices, icons, verisimilitudes, and bric-à-brac; it all can attract us, can elicit emotion, can start a collector on a pathway of addiction. (Which of us easily could miss an episode of, say, Down-town Abbey?) Identification is all! And what if you've never seen or heard of South Pacific? A young female in our animatedly acculturated company, in her 20s, had never heard the song, "Some Enchanted Evening," let alone been given the gift of Cable's profound reasoning: "You've got to be taught to hate the people your relatives hate!"

Or am I being too pedantic?

Yes, creativity is about fun and catharsis; a measure of pleasure to detract from reality. Does it have to be didactic? Does Creativity have to have a lesson, a meaning, a purpose other than to entertain, to make money, to provide surcease from the steady strife of reality? Yes, ‘a steady strife’ it is, this learning of formalities and correctness of behaviour and thought and expectation and rule and custom. How else did we arrive at the tragic shooting of the 49, earlier this month? How else did we sustain the Holocaust, the Crimean war, the War of The Roses? All of history is too full of reality butting up against reality for us easily to live without strife. We must needs populate history with the re-telling, such that we put words into the mouth of Anne o'Cleaves, or think we know what Beowulf himself felt, and then take someone else's' imaginings for reality!

How easily to distinguish between truth and fiction? How easily to allow oneself transportations of emotion during a musical about the five daughters of Tevye, or the seven Grooms for seven Women? How to disbelieve those who tell you 40 virgins await? How to unlearn the pain-body of history that says my Afrikaans fore-bearers were fed ground-glass in their porridge in British prisons, and that's why my mother's family hated my oh-so English father! How to let go being a
Jew or an Arab or a Black or even a man or woman and just be a Person? How else but...

Reality, creativity, thinking, and feeling; it all is one. "Nothing is good or bad but thinking (or feeling) makes it so," the poet admonished. Yes, creativity needs not be didactic. But at the very least it is best deployed to create a sense of universal compassion and care and responsibility, advancing our very evolution; or do we merely stay fools, lighting our way to dusty deaths?
Posted by rfpentelbury at 5:35 PM