Boiling Blood (part one of seven)

My illustrations and story of Doodley and the Seven Sins infuses this series of seven one-page essays, entitled Pundit's Grammarland,  allotted for children, adults, and all those who like to explore a lot. 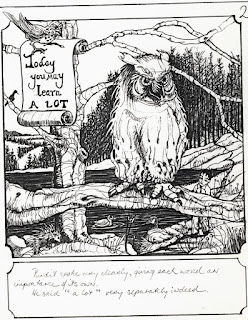 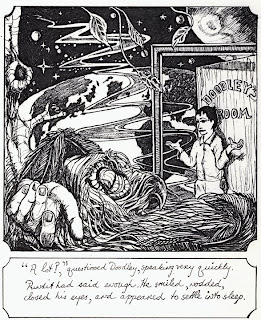 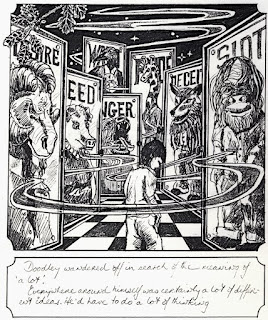 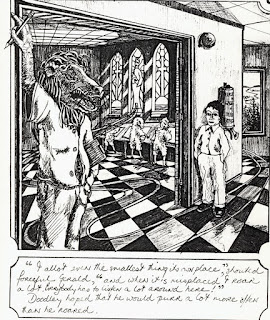 "What boils my blood," my old friend used to begin, "is the..." And invariably some vitriol would follow suit. We easily are angered by others, by things that do not suit ourselves. It is a flare in some, in others a dynamite stick, and in yet others an unquenchable fire. All of us carry it around, like a box of matches. The trick is when and how to use it. It is not necessarily a negative force. It can galvanize the cowardly and bring to a decision the uncertain. It can declare a necessary boundary to a threat, and it can free a person from slavery. Even Jesus used it toward the money-changers. But the prudent person uses it sparingly. Like most times when I am angry, and act out from it, I find it reflecting back on me, on my inadequacy, my foolishness, my ego. It almost invariably is misguided energy; non integrative.

I had a very bad night. Perhaps it was because of the hot water cup I had about an hour before bedtime. Perhaps it was the afternoon glass of tomato juice for a change; very salty! Kept me lightly sleeping; got me up for cold fridge water on two if not three occasions. But no. What really began slowly but surely to get my blood boiling was the inescapable clanking. That intermittent, persistent, unmistakable clanking. Just the night before I’d fixed the ghostly howling and whistling that plagues this apartment whenever the sea breezes reach a certain tempo. Masking-tape down the window seal, well, sealed things shut. Was the clanking now because of the tighter seal? Or was it something on the deck? After a while I learned its precise sound; a soft enough kerplink, then a puk, puck, clang, clank! Just loud enough to be coming from the balcony, or perhaps the neighbor's balcony above ours? In several sojourns off my bed in the dark I checked on the dishwasher, the microwave, the fridge, the laundry dryer, the stove vent. On one occasion I actually went out onto the balcony in the fairly strong wet winds, got splashed from the rain, the soles of my bare feet wet, and rescued our silver-tin candle-lantern, checked the Christmas light wreath and cords, but to no avail. And each time I came back to bed, it would take about 25 minutes before I'd get that invariable kerplink preceding the clang, clank! In fact, so befuddled was I that it took several hours before I discerned that the sound had its own regularity, and that the clang-clank that on some occasions would startle my almost sleeping brain was indeed far too regular to be from the wind. and then... kerplink! Exhausted, I'd haul myself up out of bed yet again and search. But it was not until after the last one, at 4:25 a.m., to be precise, that jolted awake yet again, I slipped out of bed like a ninja (albeit an old and cranky one) and decided to wait in ambush for it! Whatever made the sound, I'd be awake, alert, poised, and ready to fix it for good! So there I was, just waiting at the balcony door, the very beginning of dawn but a smudge on the sea, when I heard that kerplink, and I whirled. The kettle light blinked! It blinked! And then, puk, puck, clang, clank it clinked. I was amazed at how soft the sound actually was. And yes, of course, the vessel was bone dry! I had not switched it off last night. Thank goodness for built in safety switches. Ha! And so, my ineptness finally brought to light, I chuckled into the dark. Switched it off. And went back to bed.

Anger is almost always about our need to overcome. Insult, betrayal, impatience, irritability, ego-threat, and unwarranted noise provoke levels of it, appropriate or not, and we can dish out our anger like a tool of vengeance. The kettle survived. I did not yank out the cord, chuck the entire thing over the balcony. I merely reached forward and flipped its switch. Would that we so easily were able to monitor and to turn on or off the switches in ourselves. After all, having a kettle is most useful. And having anger too, for that matter, has its merits. It is in understanding what the disturbance is in the first place that most assists us to ameliorate our instincts. That, and to listen for that first 'kerplink'! 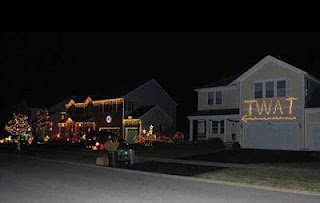 Posted by rfpentelbury at 10:42 PM