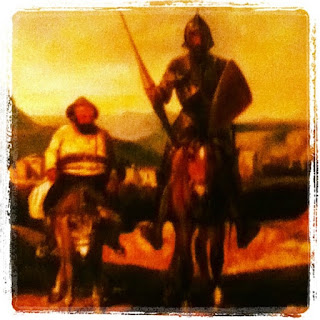 Forever Friends hardly need assurance. We each do what we do on our daily basis without necessarily knowing what the other does at all. Dentist surgery, even heart check-ups are par for the course. Furniture acquisition, moves from one place to another, the new, the old, the regular, the dreamed. These are the things of life that keep us going, but the details are just that. Forever friends will unexpectedly drop you a line, occasionally, a silvered and gold thread of words that re-establishes the connection, tenuously, then disappear again. But none of that really matters; it just remains important. As Sancho sings: "I really like him!"

The importance is in that we remain friends, people who know of and like one another. Caring for is another matter; it takes work. A dear friend of mine wields friendship like a verb. It is an almost daily delight of touchstones (given today's ease of email and texting), and it is neither trivial nor mundane; his interests are too far ranging to be that. But it does take the conscious effort (or will) to reach out and write. And we can hardly be expected to do that for everyone. It might take up an hour or more of a person's day! So we continue our daily fare with our friends in mind, here and there. The thoughts we give them are retrospective, a memory, or immediate, an interest in the moment. But our own lives are complex enough and so we do not continuously write, phone, or communicate. Yet were the phone to ring, an email to arrive, the feeling would be as though we saw them but yesterday.

Trouble is, the uncertainty. There are so many friends that I would assure of my interest, my affection, my care. But I do not make a verb of these feelings; they remain nouns, gerunds tucked away without surcease of unrequited intentions. The letters do not get written. The feelings do not get revealed. There is an expectation that the other will understand. There is an expectation that the other feels the same. Does the same.

Birthdays and Christmas are the worst. Missing the other's birthday would appear a total lack of care. Mike, when is yours? Mike? Michael? And you are not the only three M's on my list. I could be sending a present by post every week for the amount of people I like, would want to please. Facebook certainly alerts me to that. This week is Naomi's birthday. And since I know some seven Naomi 's only one of you, reading this, might know that I thought of you. Yes?

Point is, this is no exoneration. Nor is it an excuse for my own lack of contact. Rather, it is an examination. It is what it is. We each are engaged somehow with something in the moment, and so the days unfold, each by each. And as the years move us on there is a dropping off of familiarity, a definite unknowing of the particulars, a seeming estrangement. One old friend I recently met after a ten or so year absence did not hug me, but put out his hand; we are now somewhat strangers yet to be reunited, or not. Thing is, the liking is still there. The feeling has foundation. But the details will interest, intrigue, start a dialogue, or begin to appear dismissive. Discourse needs be interesting for friendship to flourish, it seems. Or else the typing between us, the phone calls, the letters, end. Friend?
Posted by rfpentelbury at 8:56 AM